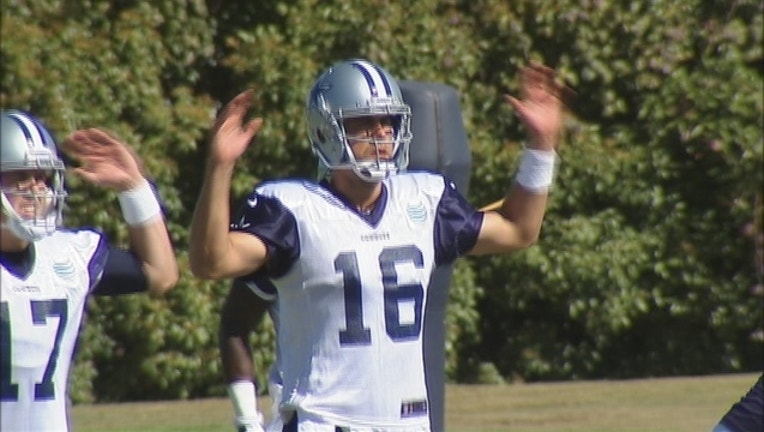 IRVING, Texas (AP) -- Matt Cassel's biggest concern when he was traded from Buffalo to Dallas was the timing of the birth of his fourth child.

Now there's a deadline with his wife just days away from delivering. Cassel will be the starting quarterback when the Cowboys visit the New York Giants on Oct. 25, after their bye.

Coach Jason Garrett made Cassel the starter Wednesday after Brandon Weeden lost all three of his starts in place of the injured Tony Romo.

Dallas is also promoting rookie guard La'el Collins, a projected first-round pick from LSU who wasn't selected because his name surfaced in the investigation of a woman's death days before the draft.

The defending NFC East champion Cowboys (2-3) were inconsistent on offense with Weeden and need at least one win, perhaps two, to stay in contention in the next four games without Romo. He's out at least that long with a broken left collarbone.

In Cassel, Dallas is picking someone with more experience -- and more wins. Cassel made 71 starts for New England, Kansas City and Minnesota and has 33 wins to just five for Weeden, although both have losing records for their careers.

The Dallas offense has posed little threat down the field with Weeden, and the running game has struggled with extra defenders closer to the line of scrimmage.

In their 30-6 loss to New England last Sunday, the Cowboys went without a touchdown for the first time since kicking six field goals in an 18-16 win over Washington in 2011. Romo played that game with cracked ribs.

Cassel grew up a fan of the Cowboys because his late father was from Lubbock in West Texas. He followed them when Dallas won three Super Bowls in four years with an offense powered by Troy Aikman, Emmitt Smith and Michael Irvin.

"The guys in this room can win ballgames," Cassel said. "There's no doubt about it."

Cassel led New England to an 11-5 record after Tom Brady's season-ending knee injury in the 2008 opener, although the Patriots missed the playoffs. He was traded to Kansas City and started for the Chiefs before going to Minnesota and Buffalo.

With the Cowboys looking for another veteran backup following Romo's injury, the Bills traded Cassel after Tyrod Taylor won the starting job in training camp. The 33-year-old will make his 92nd appearance next week in his 11th season.

"I know how hard it is to get on the field in this league," Cassel said. "At the same time, it's always been a dream of mine to play for the Cowboys, let alone to be a starter for the Cowboys."

Collins will replace Ron Leary at left guard and make his second career start against the Giants. He started in Week 3 against Atlanta while Leary was out with a groin injury. Collins was inactive for the opener and the past two games because he didn't have the position flexibility needed for a backup.

The Cowboys signed Collins as an undrafted free agent a few days after the draft. He picked Dallas over Miami.

"Definitely the start of showing I'm becoming the player I want to be," Collins said. "Just taking that approach every day."

NOTES: The Cowboys waived WR Vince Mayle after activating him from the practice squad for the New England game. He filled the spot that opened when RB Lance Dunbar was placed on season-ending injured reserve with a torn anterior cruciate ligament in his left knee.