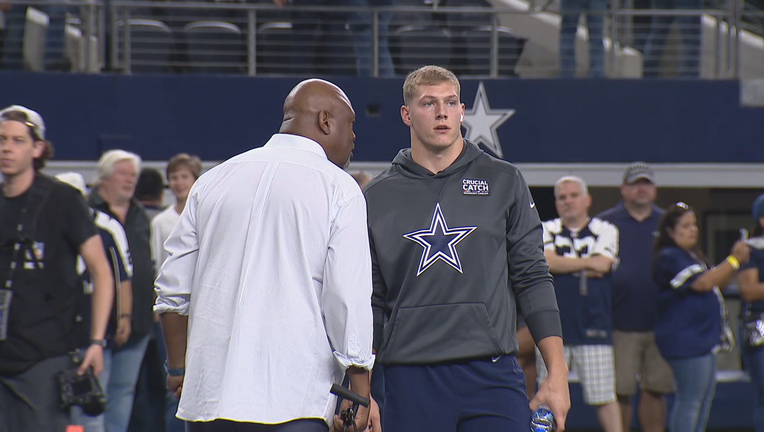 DALLAS - The Cowboys have a new challenge as they face the defending Super Bowl champions on Sunday. They will be missing linebacker Leighton Vander Esch.

Vander Esch is a key defensive player who made it to the Pro Bowl in his rookie season last year. He ranks second for the Cowboys this season in tackles.

Head Coach Jason Garrett said the 23-year-old will not play this Sunday against the Patriots because of ongoing problems with his neck. He suffered an injury last month against the Eagles.

Garrett said he underwent an MRI and is now listed as week-to-week. But, he does not think the injury will threaten his career.

Vander Esch's absence will be a setback for the Boys, especially considering the defense last Sunday against the Lions wasn’t exactly stellar.

The Patriots are 9 -1 on the season, defending Super Bowl champions and they’re coming off a win on Sunday against the Eagles.

Cowboys coaches and players are sharing a few thoughts about taking the field against New England.

“They’re as good as there is. They’re basically No. 1 in just about every important category it seems. So they’re doing a really good job,” said Cowboys offensive coordinator Kellen Moore.

“It’s gonna be a tough test. I wouldn’t say it serves as a measuring stick though. I would just say we have to go out there and play good football. Just try to win a game like we do every week,” said Cowboys wide receiver Amari Cooper.

Quarterback Dak Prescott said it’s always special playing an organization with the kind of winning tradition that the Patriots have built. But he has confidence in his team.

“I know how mentally tough this group is. So if that’s what it comes down to, I like our chances. I like where we stand,” he said.

As far as the point spread goes, New England is favored by 6.5 points. That’s only a little more than two field goals.

And while the Patriots do have a pretty good quarterback in Tom Brady, Prescott is having a potential MVP season leading the Cowboys.