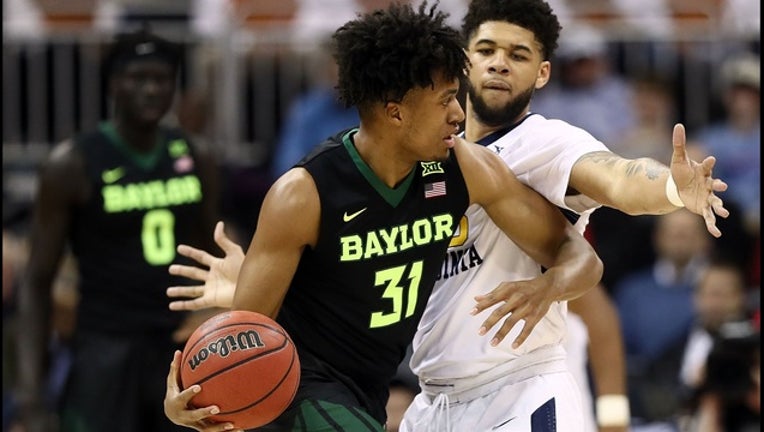 Terry Maston of Baylor controls the ball as Esa Ahmad of West Virginia defends during the Big 12 Basketball Tournament quarterfinal game at the Sprint Center on March 8, 2018 in Kansas City, Missouri. (Photo by Jamie Squire/Getty Images)

It was a sour Selection Sunday for Southern California and Notre Dame. Especially for the surprised Trojans.

A couple of noteworthy NCAA Tournament snubs helped create quite a field for the NIT.

USC, Notre Dame, Baylor and Saint Mary's grabbed No. 1 seeds for the National Invitation Tournament after their NCAA bubble burst, and Louisville, Oklahoma State, Middle Tennessee and Oregon joined them in the 32-team field.

The Trojans (23-11) finished second to Arizona in the Pac-12 this season and lost 75-61 to the Wildcats in the final of the conference tournament Saturday night. Coach Andy Enfield said he was shocked when his school was left out of the NCAA field of 68.

"If all that matters is the quality of your best win or two on your schedule, then we shouldn't even play and just set the field in December after the out of conference was complete," he said. "It basically discredited our entire league schedule and no matter what we or some of the other teams in our league did during the Pac-12 or the conference tournament did not obviously matter."

USC has won six of eight heading into Tuesday night's game against UNC Asheville in its first NIT appearance since 1999. While it prepares for the Bulldogs, UCLA and Arizona State are headed for the NCAA Tournament despite finishing below the Trojans in the Pac-12 standings.

"We're very disappointed. Our players deserve to be in the NCAA Tournament," Enfield said.

Notre Dame (20-14) had one of the most intriguing bubble cases after preseason All-American Bonzie Colson missed 15 games with a broken left foot. Senior guard Matt Farrell also was sidelined for five games with an ankle injury.

Colson returned late in the regular season and Notre Dame picked up two wins in the ACC Tournament before losing to Duke in the quarterfinals. The late charge wasn't enough and the Irish will play Hampton in the first round of the NIT on Tuesday night.

"Our guys, after a season of gut punches, that was another gut punch today," coach Mike Brey said. "But I had prepared them for the NIT the last month. We were very realistic about how this could go given where we were today with our resume and the whole bit."

Notre Dame is making its 13th appearance in the NIT. It tops the field with 26 wins in the tourney.

Baylor (18-14) and Saint Mary's (28-5) round out the No. 1 seeds. The Bears will face Wagner in their first game Tuesday night, and the Gaels take on Southeastern Louisiana later that night.

"I love Tommy Amaker," Wojciechowski said. "He's one of the finest people and classiest men in not just college basketball, but just in general. He's an incredible coach. He's done a fantastic job at Harvard and we know that they're really good, and so it's going to be a very difficult game."

Jay Cohen can be reached at http://www.twitter.com/jcohenap