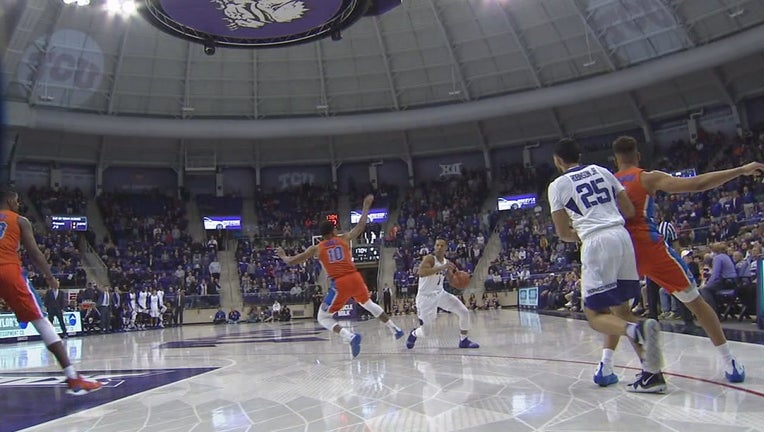 FORT WORTH, Texas - The NCAA put the TCU men's basketball program on three years' probation Tuesday and punished a former assistant coach it accused of accepting $6,000 from an aspiring sports agent and then lying to the school about it.

The school avoided scholarship reductions and limits on recruiting imposed on other programs in a federal corruption case that has ensnared several big-name schools. TCU was fined $5,000 and 1% of its men's basketball budget.

TCU placed assistant Corey Barker on administrative leave in March 2019 after he was accused in court documents of accepting the money in a Las Vegas hotel room two years earlier.

Almost two years later, Barker twice declined to be interviewed by TCU officials not long before he was placed on leave, the NCAA said.

"We are proud of our culture of ethical leadership and the way we immediately responded to the federal basketball probe and promptly addressed the issues once we learned of possible involvement by a former coach," the school said.

Barker, who also denied involvement during the NCAA's investigation after agreeing to be interviewed, was given a five-year show-cause penalty. Any school that hires him during that period must prove to the NCAA he can perform athletic-related duties.

Barker said during the NCAA's investigation that he gave the money back to the aspiring agent almost immediately after the Las Vegas meeting that was caught on surveillance video. The NCAA said it found no evidence the money was returned.

"I can tell you the act of taking the money constitutes the violation," said former Bowling Green President Carol Cartwright, who led the NCAA inquiry.

The meeting also violated NCAA rules because it formalized a business relationship in which the prospective agent and the management company could attempt to use Barker to gain access to TCU players.

The NCAA said Barker helped the agent make contact with the family of the coach's cousin, who was an NBA prospect. Barker also told the agent a TCU player would be "a layup for you," according to the NCAA's investigation.

The "false or misleading information" provided by Barker to TCU and the NCAA pushed the former coach’s violation to a higher level that warranted a show-cause penalty, the association said. TCU's violation had a lower classification.

TCU coach Jamie Dixon hired Barker, a Houston native who maintained strong ties to that area, when Dixon returned to his alma mater in 2016-17. Barker was placed on leave at the end of his third season with the Horned Frogs.