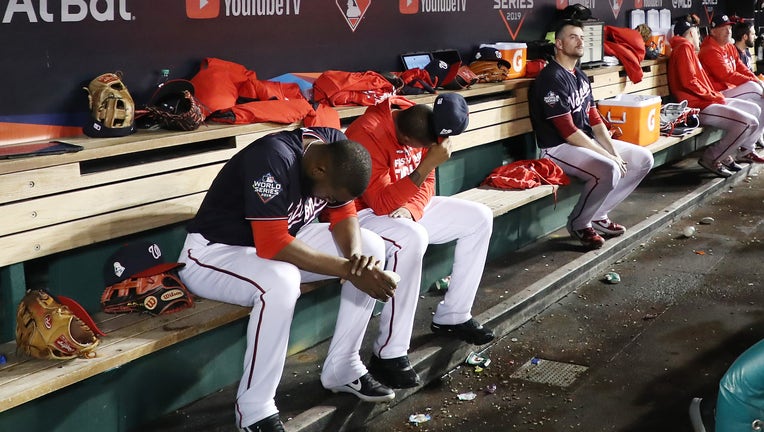 WASHINGTON - Nationals fans hoped to celebrate a championship with the home team this weekend at the first World Series in Washington since 1933.

Following a 7-1 setback Sunday night, Washington prepared for a trip to Houston trailing 3-2 in a World Series that shifted dramatically during a lost weekend for the Nats.

After winning twice in Houston, Washington came up flat in its own ballpark.

On Sunday, the third straight sellout crowd lost much of its enthusiasm after a pair of two-run homers put the Astros in front 4-0 in the fourth inning. A solo shot by Juan Soto in the seventh cut the gap, but there would be no comeback.

Washington hit just one home run during the three-game set, managed only five extra-base hits and went 1 for 21 with runners in scoring position.

And so, the wait between World Series victories for Washington at home is at 86 years and counting.

Before this stretch, Washington had not lost successive games since Sept. 13-14. Between that two-game skid and this current slide, the Nationals went 22-5.

Fans arrived at the ballpark Sunday with the modest expectation of watching the Nationals regain the upper hand following 4-1 and 8-1 losses. Washington was supposed to have ace Max Scherzer on the mound, but the right-hander was scratched with spasms in his right trapezius and neck.

The far less heralded Joe Ross got the start instead.

Accompanied by his daughter Alexa, Carter shelled out $1,400 to secure a pair of standing room tickets for their first World Series game.

"We thought we could see Max clinch it," Jeff said, shaking his head.

That pretty much summed up the weekend for Nats fans: Boundless anticipation followed by crushing disappointment.

Washington had only four hits Sunday night. Two of them came in the second inning, when singles by Soto and Howie Kendrick put runners on the corners with no outs.

Ryan Zimmerman followed with a strikeout, and Victor Robles bounced into a double play.

Astros ace Gerrit Cole pitched seven sparkling innings to get the win. In the opener, Washington pounded him for five runs and eight hits, including two homers.

That's the story of this World Series: Playing at home is anything but an advantage. This is the first Series since 1996 in which the visiting team has won each of the first five games.

Nationals catcher Kurt Suzuki missed a second straight game with a hip flexor strain, but he's feeling better and should be ready to go in Game 6 following an off day Monday, manager Dave Martinez said.

Suzuki sustained the injury while chasing a pitch from behind the plate. Yan Gomes started at catcher.

The smallest man on the field has one of the lengthiest streaks in postseason history.

Jose Altuve has reached base in 25 straight playoff games, the longest run in franchise history and tied for second-longest ever in the American League. With a single in the third inning, Altuve tied Boog Powell for second place behind Miguel Cabrera (31).

Altuve's streak started in Game 7 of the 2017 World Series.

Despite hitting into a pair of double plays and going 1 for 5 Sunday, the 5-foot-6 star is batting .353 this postseason. With two hits in Game 4, Altuve became the first second baseman to have three straight multi-hit games in the Series since Mark Lemke in 1991.

Altuve and Michael Brantley form a formidable 2-3 punch in the Houston lineup.

"The quality of their bats, specifically in the World Series, has been second to none," manager AJ Hinch said.

The last time Washington captured a World Series was in 1924, when Walter Johnson won Game 7 against the New York Giants.

The Big Train's grandson, Henry Thomas, was at the ballpark Sunday, wearing a throwback Senators jacket and rooting for the current incarnation of Washington's baseball team.

"As a fan, it's important for the legacy of baseball to have a team here," said Thomas, who paid face value for his $340 ticket.