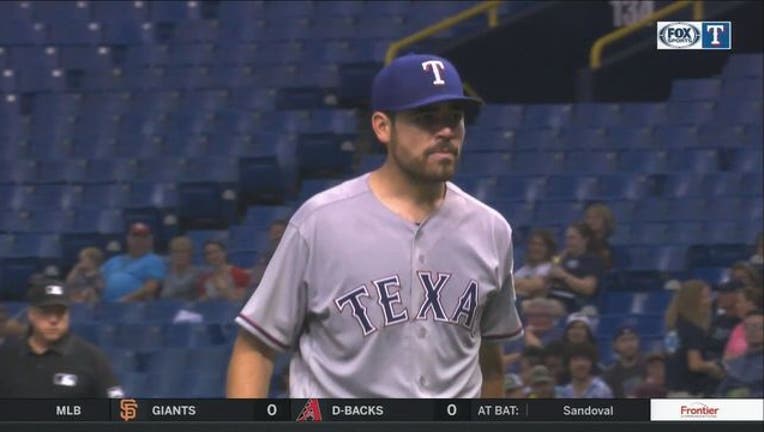 ST. PETERSBURG, Fla. (AP) - Matt Moore allowed an unearned run over seven innings in his first start against his former team and the Texas Rangers beat the Tampa Bay Rays 7-2 on Tuesday night.

Moore (1-3), who went 39-28 with Tampa Bay before being dealt to San Francisco in 2016, struck out six with five hits and two walks. The Rangers acquired the left-hander from the Giants in December.

Daniel Robertson had the lone run off Moore, scoring on shortstop Isiah Kiner-Falefa's throwing error in the third.

Adrian Beltre, Ronald Guzman and Shin-Soo Choo had two RBIs each for the Rangers. Kiner-Falefa had four hits, including a double.

Beltre hit his second sacrifice fly of the game and Guzman had a two-run double off Yonny Chirinos (0-1) as the Rangers went ahead 5-1 in the fifth.

Guzman has hit safely in his first four big league games since being recalled Friday from Triple-A Round Rock.

Beltre drove in Texas' first run with a first-inning sacrifice fly, and Choo made it 2-0 on a sac fly during the second.

Choo added a solo homer in the sixth.

Beltre played in his 2,832nd major league game, moving past Rafael Palmeiro for 18th place on the career list. He has 1,647 RBIs, which is five away from tying Tony Perez for 27th since 1920.

Rays right fielder Carlos Gomez attempted to throw out Beltre at first after fielding a liner on the bounce in the seventh, but the Rangers star crossed the base safely for his 3,067th hit.

Chirinos gave up six runs and seven hits over 5 2/3 innings. The rookie right-hander entered with a 14 1/3 inning scoreless streak.

Wilson Ramos hit a solo homer in the ninth for the Rays.

Rangers: INF Jurickson Profar, who hit the right side of his head on the infield dirt after a collision at second base Monday, remains in concussion protocol. ... Reliever Tony Barnette (right shoulder tightness) was placed on the 10-day disabled list. ... OF Delino DeShields (broken left hamate bone) has resumed full baseball activities.

Rays: 3B Matt Duffy went on the 10-day DL with a strained right hamstring. ... 1B Brad Miller (strained left groin) played seven innings and went 1 for 4 in his first game with Class A Charlotte.

Robertson lost control of his bat twice on swings leading off in the first, with the bat both times hitting the protective netting behind the Rangers' dugout. Two batters later, Gomez slammed his bat on the ground and broke it after hitting an infield pop-up.