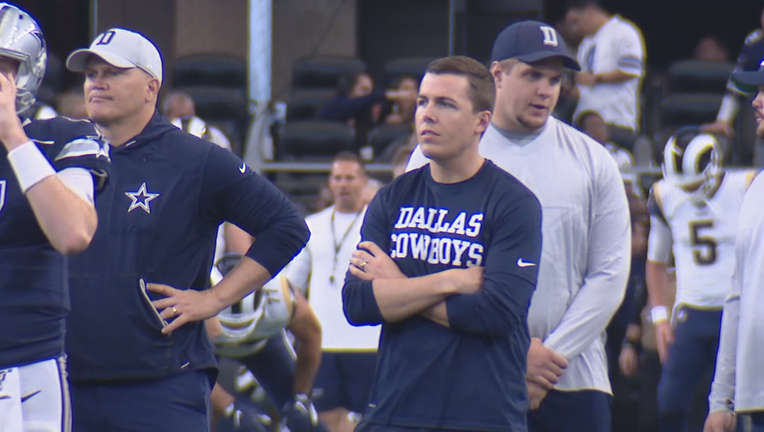 FRISCO, Texas (AP) - Dallas offensive coordinator Kellen Moore said Saturday night he is no longer pursuing the Boise State job, and the Cowboys agreed on a multiyear contract extension with their play-caller.

The 32-year-old Moore was a candidate at his alma mater after Bryan Harsin took the Auburn job. Moore was the winningest quarterback in college football history with a 50-3 record when he left Boise State in 2011.

"I will always root for them, and I hope one day to be a part of the program again," Moore said in a statement issued by the team. "We are building something special here in Dallas. I am excited for us to put it all together and finish the job."

The Cowboys finished No. 1 in the NFL in total offense in Moore's first year as the play-caller last season and were leading the league again this year when quarterback Dak Prescott went down with a season-ending ankle injury in Week 5.

Dallas lost six of the first seven games without Prescott, but has won three straight games with increasingly solid production from backup Andy Dalton to stay alive in the race for the NFC East title. Dalton is 4-4 as Prescott's replacement.

The Cowboys (6-9) visit the New York Giants (5-10) on Sunday, and the winner can make the playoffs as NFC East champion if Washington (6-9) loses to Philadelphia later in the day. Washington advances to the postseason with a victory.

Moore, who started his pro playing career as an undrafted free agent in Detroit in 2012, spent six seasons in the NFL but only played in 2015. He started the final two games of a lost season for Dallas after Tony Romo was injured.

Moore retired in 2018 and immediately became quarterbacks coach for the Cowboys. He was promoted after one year and called plays in Jason Garrett's final season as coach in 2019.

New coach Mike McCarthy decided to keep Moore in that role despite his own long history as the play-caller when he was coach in Green Bay.