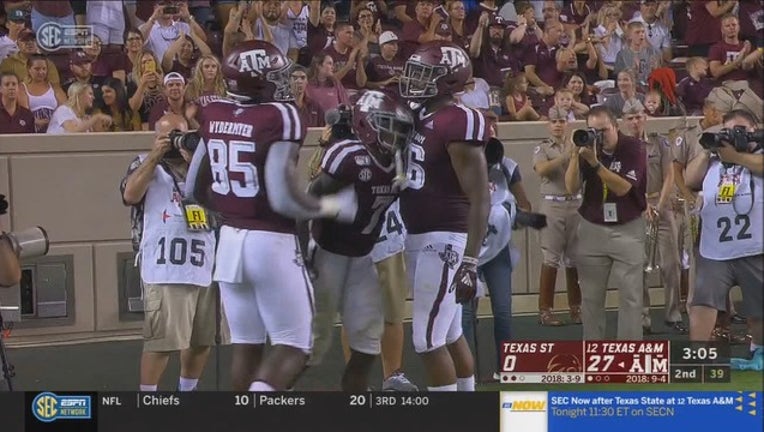 COLLEGE STATION, Texas (AP) - With Texas A&M's date against No. 1 Clemson looming next week, it would have been easy for the Aggies to take 33½-point underdog Texas State lightly.

After the 12th-ranked Aggies easily handled the Bobcats, coach Jimbo Fisher said he never worried about his team looking past its first opponent.

"I'm telling you there was no looking at Clemson, doing anything with Clemson and that's a fact," he said. "We've learned that. We're not going to do that ... you've got to learn to play the game at hand and I thought they did that."

Kellen Mond threw three touchdown passes and ran for another score in just more than three quarters, and Texas A&M had four interceptions in the 41-7 rout.

Mond, who threw for 194 yards, had touchdown passes of 21 and 3 yards and ran for another score in the first two quarters as Texas A&M raced to a 28-0 halftime lead.

Quartney Davis had 85 yards receiving and a touchdown and Jhamon Ausbon added a touchdown catch. First-year starter Jashaun Corbin had 103 yards rushing with a touchdown reception and a TD run.

"It was a solid first game and hopefully we'll get a lot better," Fisher said.

Tyler Vitt threw two interceptions in the first half before first-year coach Jake Spavital, a former Texas A&M assistant, benched him for Gresch Jensen. But he didn't fare much better, throwing two interceptions, including one on his second pass. Vitt was 9 of 15 for 51 yards and Jensen had 160 yards passing and a fourth-quarter touchdown pass.

The Bobcats couldn't get anything going on the ground and were outgained 246 yards to 8.

"We've still got a long ways to go offensively," Spavital said. "We've got to figure out our quarterback situation."

The Aggies took a 7-0 lead when Mond connected with Quartney Davis on a 21-yard touchdown pass with about eight minutes left in the first quarter.

Leon O'Neal Jr. grabbed the ball just before it would have hit the ground for an interception on Texas State's next drive.

Fisher said the play of his secondary was one of the highlights of the opener.

"They were huge," he said. "Once they start making plays and realize they can make them, they gain confidence."

A 1-yard touchdown by Corbin pushed the lead to 14-0. That score was set up by a 40-yard pass from Mond to Ausbon three plays earlier.

Mond showed off his scrambling skills in the second quarter on a 5-yard touchdown run where he stiff-armed a defender.

"I felt like a lot of the work I put in this offseason led me to what I was able to do tonight," he said.

Jones hopped in front of a receiver on Texas State's next drive to give the Aggies another interception with about five minutes left in the second quarter. Mond's TD throw to Corbin came after that to make it 28-0.

Spavital pulled Vitt for Jenson on Texas State's next drive, and he was quickly intercepted.

Mond's only big mistake came when he was intercepted by Bryan London II in the third quarter. But it didn't matter much as Jones grabbed his second interception on the next play.

Freshman Isaiah Spiller had an 85-yard run late in the third quarter. The Aggies pushed the lead to 38-0 when Mond threw a 1-yard pass to Ausbon early in the fourth, and the QB headed to the bench soon after that.

The Aggies looked sharp on both offense and defense against a lesser opponent, but will need to step up their play next week if they hope to topple No. 1 Clemson.

Texas A&M's secondary was considered a weak spot last season when the group finished the season with just seven interceptions. After they had four in the opener, a reporter jokingly asked Jones if fans should expect them to match that in each game this season and finish with 48.

He thought for a second before smiling and leaning into the microphone to simply say, "yes."

"They all agree that a lot of the stuff happening tonight was self-inflicted. I think that they all believe that if we play well together as a team and stop shooting ourselves in the foot, that we can be very competitive in the Sun Belt," Spavital said.

The Aggies should retain their spot in the poll before their first big test next week against the defending national champions.