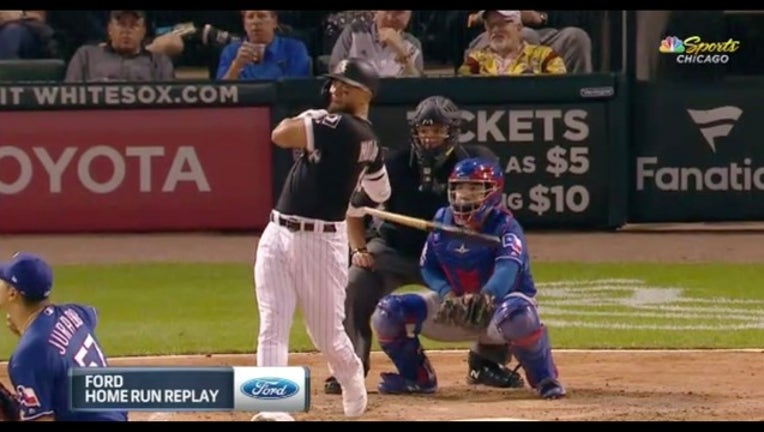 CHICAGO (AP) - Yoán Moncada lined a two-run homer on his return from the injured list, Ross Detwiler struck out a career-high eight and the Chicago White Sox beat the Texas Rangers 6-1 on Thursday night.

James McCann hit a solo shot and doubled, and Jose Abreu, Tim Anderson and Matt Skole each had an RBI as Chicago won for the third time in four games.

Out since July 31 with a strained right hamstring, Moncada batted cleanup and made an immediate impact with his 21st homer as the White Sox jumped to an early five-run lead. He also doubled in the fifth and gave his team a scare when he fell awkwardly exiting the batter's box as he grounded out to end the seventh. He was tended to by a trainer and remained in the game.

Elvis Andrus' solo homer accounted for the only run against Detwiler (2-3) and was one of only three hits off the left-hander, who walked none over six innings. The 33-year-old earned his second win this season - and only his second in the majors over nearly three years.

BOSTON (AP) - Brock Holt hit an RBI single with one out in the bottom of the 10th inning as the Red Sox won a weather-suspended game that began Aug. 7.

The original contest was halted after a 1 hour, 49 minute-rain delay early on Aug. 8 with the score tied 4-4 and nobody out in the top of the 10th inning. Royals catcher Meibrys Viloria was facing a 2-1 count against Red Sox reliever Josh Taylor.

Play resumed 14 days, 14 hours and 18 minutes later. Ryan O'Hearn struck out and pinch hitter Bubba Starling grounded out to end the Royals' inning. Starling took the spot of Billy Hamilton, who went 2 for 4 with a strikeout on Aug. 8 but was designated for assignment on Aug. 16.

The official time of game was 3:48, with only 12 minutes being played Thursday.

CHICAGO (AP) - Kyle Hendricks pitched seven sharp innings as the Cubs won their fifth straight despite getting only two hits.

Anthony Rizzo hit an RBI single to help the NL Central leaders complete a three-game sweep. The Giants lost their fourth in a row.

A day after the Cubs won 12-11 in a game with seven home runs, there was a brisk breeze blowing in at Wrigley Field and the teams combined for just six hits.

Hendricks (9-9) allowed three hits, struck out seven and walked none. Relievers Brandon Kintzler, Kyle Ryan and Rowan Wick each got two outs to complete the four-hitter. Wick finished for his second save as Cubs pitchers combined for 10 strikeouts without a walk.

Jeff Samardzija (9-10) gave up one run on two hits in seven innings against his former team.

San Francisco's best scoring chance came in the eighth. Crawford tripled off the right field wall with two outs against Kintzler. Ryan, a left-hander, then came on to strike out pinch-hitter Austin Slater to end the inning.

PITTSBURGH (AP) - Max Scherzer pitched four innings in his return from the injured list, giving up one run and four hits.

The three-time Cy Young Award winner, who was put on the IL on July 26 with a strain in his upper back, struck out three and walked one. The Nationals hadn't set a pitch count for Scherzer but said they would closely monitor him. He threw 71 pitches, 48 for strikes.

Anthony Rendon and Howie Kendrick homered for Washington, which leads the NL wild-card race and won for the ninth time in 11 games. Kendrick singled, doubled and hit his 14th homer, a two-run drive in the eighth that made it 4-1. Rendon hit his 28th home run in the ninth.

The Pirates fell to 8-30 since the All-Star break. Steven Brault (3-3) allowed two runs in six innings.

Scherzer is 7-0 in his past 11 starts. Hunter Strickland (2-1) allowed one hit in two innings for the win.

Fowler's 15th home run of the season, off of a 97 mph fastball from Yency Almonte (0-1) in the seventh, capped the comeback. Matt Carpenter set it up by working a walk in an eight-pitch, pinch hitting appearance to lead off the frame.

Dominic Leone (1-0), who was recalled from Triple-A Memphis before the game, got the win. Giovanny Gallegos and Andrew Miller pitched a scoreless eighth and Carlos Martínez picked up his 15th save in 18 opportunities.

Ozuna's blast into the upper deck in left field in the fourth came after Paul Goldschmidt singled to tie the game 2-2. Ozuna has hit safely in 13 of his last 16 games.

DeJong drilled a German Márquez curve 423 feet into the left-center bleachers in the sixth to cut it to 5-4. DeJong's two-run homer extended his RBI streak to four games, one shy of his career high.

Freddie Freeman hit a tying homer in the eighth and the Braves sent Miami to its 12th road loss in a row, the longest streak in the majors this year.

The NL East-leading Braves went 15-4 against the Marlins this year.

Adeiny Hechavarría opened the Atlanta ninth with a double and later scored on Acuña's single off Ryne Stanek (0-3).

Freeman's 34th homer, an opposite-field drive to left, came off Stanek, who lost his first decision since being acquired from Tampa Bay.

Mark Melancon (5-2) faced four batters in the ninth to earn the win.

Braves starter Mike Soroka hasn't won a decision in seven straight starts. Soroka, tied for the second-best ERA in the majors at 2.41, allowed no walks and struck out five in seven innings.

Marlins starter Sandy Alcantara gave up Hechavarría's RBI single in the second and allowed three hits in seven innings. He held the top four batters in Atlanta's lineup - Acuña Jr., Ozzie Albies, Freeman and Josh Donaldson - to a collective 0 for 12.