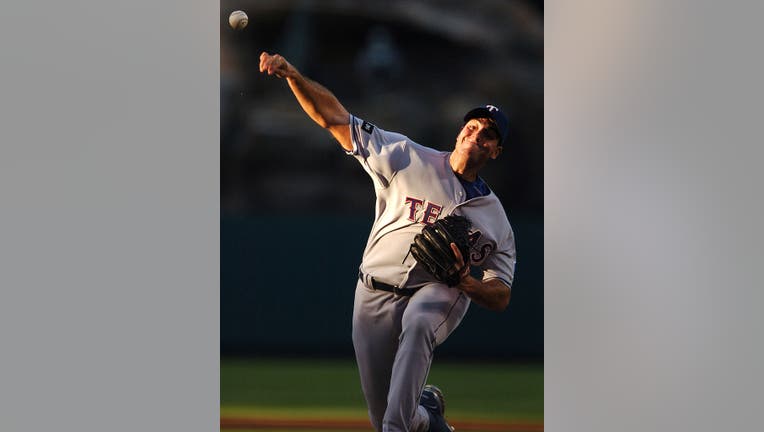 Texas Rangers starter Chris Young pitches during 5-1 loss to the Los Angeles Angels of Anaheim at Angel Stadium in Anaheim, Calif. on Monday, June 20, 2005. Young (6-4), who had not allowed more than three earned runs in his last 10 starts, pitched f

Young pitched 13 seasons in the majors, the first two with the Rangers after the 6-foot-10 two-sport standout grew up in Dallas and played baseball and basketball at Princeton. The 41-year-old had been with MLB since May 2018.

The return to Texas comes after Young interviewed for the GM opening with the New York Mets, who recently abandoned an effort to hire a president of baseball operations to focus on the GM search.

Young was the senior vice president in charge of on-field operations and the umpires with MLB. He worked closely with the Rangers on baseball issues related to construction of Globe Life Field, which opened this past season.

Young oversaw on-field operations for three rounds of neutral-site playoffs in Arlington this fall. Globe Life was the only venue to have fans during the pandemic-shortened 2020 season.

“As a Dallas native who grew up rooting for the Rangers, I recognize what a special opportunity this is and how much the Rangers mean to this community,” said Young, who lives in Dallas with his wife and three children. “I look forward to learning from and working with Jon on a daily basis.”

After winning what would become a career high-tying 12 games for Texas in 2005, Young was part of a six-player trade with San Diego. He spent five seasons with the Padres, his longest stint with one team, and was an All-Star in 2007.

Daniels said offseason discussions with manager partner Ray Davis led to the decision to separate the operations and GM titles Daniels has held since 2013.

“Chris Young’s background and experiences will be a huge asset to our baseball operations group," Daniels said. “He is a very well-regarded executive in our game. Chris’ 13-year MLB career, including two seasons with the Rangers, gives him a perspective that is unique in baseball management.”

Young joined MLB as a vice president before getting promoted in February, just before the pandemic hit.

“Since 2018, Chris has brought a valued perspective to a number of important issues, and he has been an outstanding friend and colleague to countless people at the commissioner’s office,” Commissioner Rob Manfred said. “The Rangers know they are getting an exceptional person.”