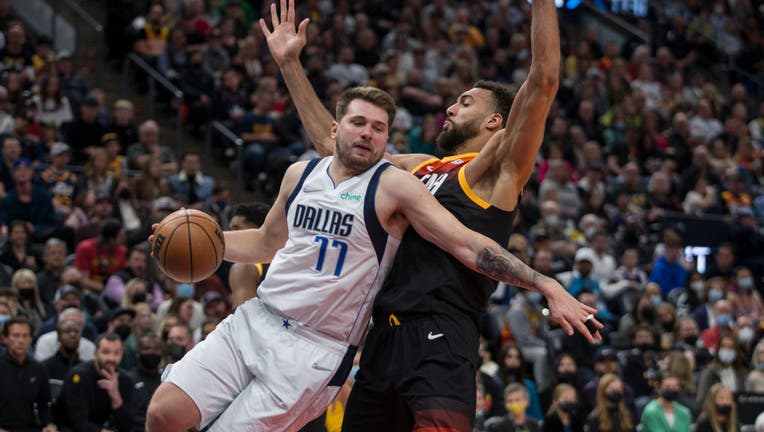 SALT LAKE CITY, UT - FEBRUARY 25: Luka Doncic #77 of the Dallas Mavericks drives against Rudy Gobert #27 of the Utah Jazz during the second half of their game February 25, 2022 at the Vivint Smart Home Arena in Salt Lake City, Utah. NOTE TO USER: Use

The Jazz did not crack under pressure and executed on both ends in the final minutes.

"When you narrow it down, we did what we were supposed to do," Mitchell said.

The teams combined to make 33 3-pointers.

Bogdanovic put the Jazz up 110-107 with a corner 3 with 1:28 left. Doncic missed 3-pointers on back-to-back possessions in the final minute. Gobert’s layup with 11.1 seconds remaining sealed it.

"They were good shots, they just didn’t go in," Doncic said.

Utah held Dallas to a single basket over the final 3:12. The Jazz got stops over four possessions, forcing six missed baskets and a turnover. It all started with Gobert blocking a go-ahead layup attempt by Doncic with 1:44 left.

"Gobert is such a good defender," Jazz coach Quin Snyder said. "When he’s switching, he’s as good as anybody standing in front of guards."

The Mavericks led by as many as nine points before the break.

"Well, we got a special player and so we had a lot of great looks and we shot it extremely well there in the first half," Dallas coach Jason Kidd said. "In the second half, we got those same shots that just didn’t go down for us."

Utah rallied after making six 3-pointers in the third quarter and took an 88-84 lead after Danuel House, Jr. and Mitchell buried back-to-back 3s to punctuate a 13-3 run.

After Clarkson hit a 3-pointer to extend Utah’s advantage to 92-86 early in the fourth quarter, the Mavericks answered with a 10-0 run and took a 96-92 lead on back-to-back 3-pointers from Bertans and Dinwiddie.

Mavericks: Theo Pinson (right fifth finger fracture) was inactive. … Bertans beat the first-quarter buzzer with his second 3-pointer to break a 31-31 tie. … Dallas made baskets on each of its first seven possessions of the game.

Jazz: Jared Butler (right ankle sprain) and Rudy Gay (non-COVID-19 illness) were inactive. … Utah had nine turnovers in the second quarter, but only seven total in the second half.

Gobert guarded Doncic on switches with success. Doncic went 8-of-24 from the field and struggled to shoot over or move around the Jazz center down the stretch.

Critics have pointed to Gobert’s deficiencies guarding the perimeter as a factor in Utah’s early postseason exits in recent years. He hopes his performance on Friday night will quiet some of the criticism.

"He was talking very bad and I just said, "Thank you for paying for watching me" and that’s it. It’s going to be my phrase every game when somebody talks to me." – Doncic on what he said to a fan who trash-talked him during the game.

Mavericks: At Golden State on Sunday.

Jazz: At Phoenix on Sunday.