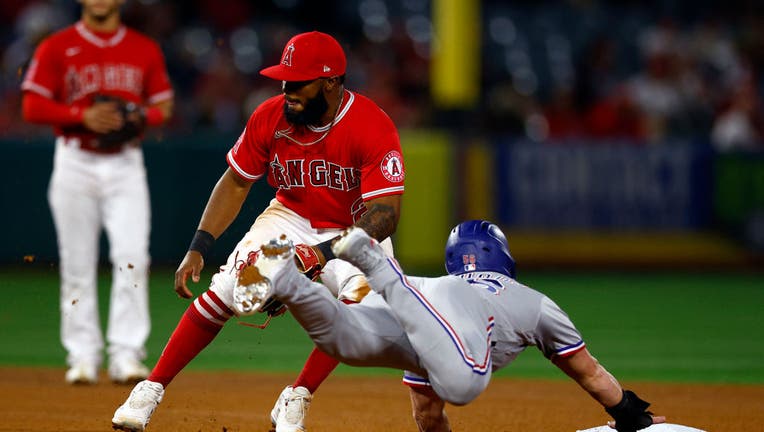 ANAHEIM, CALIFORNIA - MAY 25: Kole Calhoun #56 of the Texas Rangers steals second base against Luis Rengifo #2 of the Los Angeles Angels in the seventh inning at Angel Stadium of Anaheim on May 25, 2022 in Anaheim, California. (Photo by Ronald Martin

ANAHEIM, Calif. - Any pitching staff that forces Mike Trout and Shohei Ohtani to go 0 for 7 with a combined six strikeouts is nearly certain to feel awfully good about its night at the Big A.

The Rangers feel it's only an indicator of what their team can become — particularly when Texas' sluggers are also outhitting the Angels' former AL MVPs.

Mitch Garver homered in his third consecutive game, Kole Calhoun hit a two-run homer and the Rangers snapped a three-game skid with a 7-2 victory over Los Angeles on Wednesday night.

Calhoun had three hits and scored three runs, while Garver drove in two runs for Texas. They did more than enough to back a staff led by Glenn Otto (2-2), who yielded three hits and one run over five solid innings as the AL West rivals split a two-game series.

Otto struck out Trout and Ohtani two times apiece while earning his second major league victory. Trout struck out four times overall for the second time this season and only the eighth time in his career.

"It's good, because no matter who's standing up there, I want to execute my game and get them out," said Otto, who fanned Trout first with a sinker and second with a high fastball. "It was good to strike those guys out and send them back to the dugout and not let them get on base and cause any havoc. It was big."

Otto led a strong pitching performance by Texas against the AL’s highest-scoring team, followed by three relievers who combined for four innings of three-hit ball. Otto matched his career high with seven strikeouts on the way to his first win in five starts since April 22.

"I don't think he was as sharp as we've seen him ... but he blew away some of their best hitters," Texas manager Chris Woodward said. "Trout had a hard time with him today."

Reid Detmers (2-2) pitched five-hit ball into the seventh inning for Los Angeles in the rookie’s first home start since throwing a no-hitter at Angel Stadium 15 days ago.

Anthony Rendon drove in an early run for the Angels, whose three-game winning streak ended.

"We got behind, and they played well," Angels manager Joe Maddon said. "We had no good looks at Otto, and they dominated with their pitching tonight. Pretty bland night (offensively)."

Garver added another big game to his impressive month at the plate for Texas when he homered on the first pitch of the fourth inning. The veteran catcher has a hit in nine of his 10 appearances in May.

Calhoun followed him with a shot into the short porch in the right field corner where he made countless big catches during his eight seasons with the Angels.

Pinch-hitter Brad Miller added an RBI single in the eighth off Mayers, whose five hits allowed were his most since his rookie season in 2016 with St. Louis.

Los Angeles scored in the first inning when Ohtani walked, stole second and got home on Rendon’s single despite stumbling badly on the bag while rounding third base and nearly falling down before righting himself.

Angels: Slugging OF Taylor Ward missed his fourth straight game with the aftereffects of a stinger from running into the outfield wall last Friday. The Halos still don't expect him to be placed on the injured list. ... RHP Archie Bradley pitched a perfect ninth in his first appearance since going on the injured list with an abdominal strain in late April.