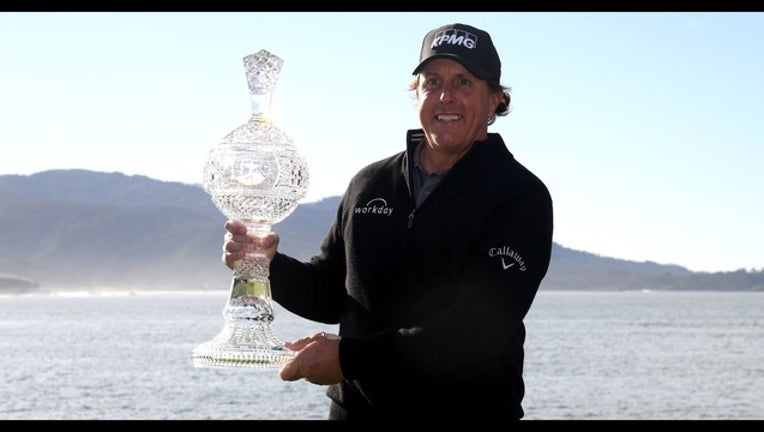 Phil Mickelson poses with the trophy after his victory during the continuation of the final round of the AT&T Pebble Beach Pro-Am at Pebble Beach Golf Links on February 11, 2019 in Pebble Beach, California. (Photo by Harry How/Getty Images)

PEBBLE BEACH, Calif. (AP) - Phil Mickelson is closing in on three decades on the PGA Tour and a half-century on Earth, and he still feels his best golf is good enough.

He was at his best at Pebble Beach, and no one had a chance.

A Monday finish brought on by rain and a freak hail storm was only a minor inconvenience for the 48-year-old Mickelson. He played two holes just as well as the previous 16 and polished off his bogey-free final round with one last birdie for a 7-under 65 and a three-shot victory over Paul Casey in the AT&T Pebble Beach Pro-Am.

Mickelson won at Pebble Beach for the fifth time, matching the record set by Mark O'Meara. He has gone 28 years since his first PGA Tour victory and his 44th, and he joined Tiger Woods as the only players to surpass $90 million in career earnings.

"And so it's gratifying to see the results and to finish it off the way I did."

Making it even more special is Pebble Beach, where he made his pro debut at the U.S. Open in 1992, where he won the first of his five titles in another Monday finish in 1998, this one in August because of rain. It's where his grandfather, Al Santos, was among the first caddies when the course opened in 1919, and Mickelson still uses as a marker the 1900 silver dollar his grandfather kept in his pocket to remind him he was not poor.

There was plenty of sunlight for the Monday morning finish, just no drama.

Mickelson, who started the final round three shots behind, never came close to a bogey and built a three-shot lead through 16 holes on Sunday night when it was too dark to finish, no matter how hard he lobbied to keep going.

The final round Sunday had been delayed at the start by one hour because of rain, and then sunshine quickly gave way to hail that covered the greens in a sheet of white and led to a two-hour delay.

Mickelson said he could "see just fine" even after sunset, knowing darkness falls quickly on the Monterey Peninsula. Casey could barely see the 3 feet of grass between his ball and the cup on the 16th hole and said there was no way to complete two holes in six minutes. Mickelson was on the 17th tee, shaking his head when he heard the siren to stop play.

On Monday morning, he had a change of heart and said he thanked Casey for standing his ground.

"Paul made the tough call, but it was the right decision in that he protected himself and myself for the competition," Mickelson said. "I just get in my own little bubble and I don't see the big picture."

It worked out well in the end.

Mickelson finished at 19-under 268. Casey needed Mickelson to make a big blunder on the two closing holes, and there was little chance of that. Casey at least birdied the 18th for a 71 to finish alone in second, the difference of $152,000.

He also won the Pro-Am with Don Colleran, the chief sales officer for FedEx.

But the final day, and all week, was about the ageless Mickelson.

This was the fourth time that Casey had a 54-hole lead of at least two shots on the PGA Tour and failed to win. The other three times he was 2-over par or worse in the final round. This time, he closed with a 71 and lost to Mickelson's 65, which matched the low score of the final round.

"A phenomenal round of golf," Casey said.

Mickelson's longest putt for par was 4 feet. He played the final 26 holes in cold, damp and windy weather without a bogey.

How it bodes for the rest of the year - particularly in June when the U.S. Open returns to Pebble Beach - was of little concern to Mickelson. The U.S. Open remains the final piece of the career Grand Slam for Mickelson, who already holds the record with six runner-up finishes. He finished three shots behind Graeme McDowell in 2010, the last U.S. Open at Pebble.

And while the fairway lines already have been cut much tighter at Pebble, the conditions were so soft that balls plugged in the fairway when they landed and greens easily held shots even from the rough.

"It's nothing like the course we'll see," Mickelson said. "I'll deal with that in six months."

Mickelson lives for the moment. He says he had as much fun winning at Pebble Beach as when he finished one shot behind in the Desert Classic three weeks ago.

It's the thrill of competition. And even at 48, that never gets old.