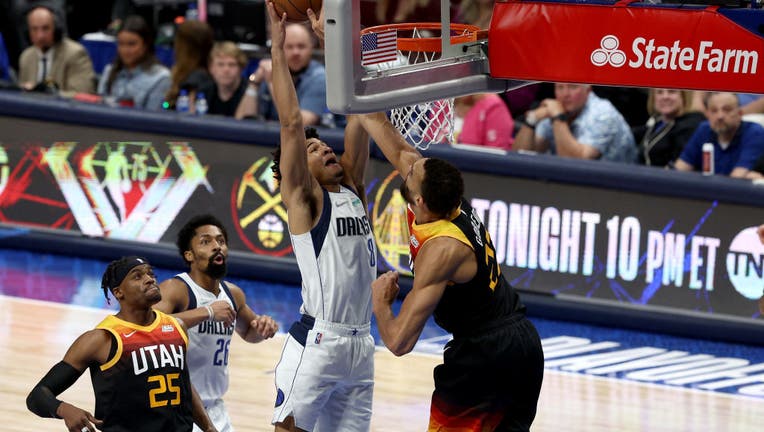 DALLAS, TEXAS - APRIL 18: Rudy Gobert #27 of the Utah Jazz blocks a shot by Josh Green #8 of the Dallas Mavericks in the first half of Game Two of the Western Conference First Round NBA Playoffs at American Airlines Center on April 18, 2022 in Dallas

DALLAS - Jalen Brunson, Maxi Kleber and the Dallas Mavericks got even in their first-round playoff series with a bunch of a 3-pointers, their fewest turnovers ever in a postseason game, and without injured superstar Luka Doncic.

Brunson scored a career-high 41 points, Maxi Kleber had 25 with eight of their playoff-record 22 made 3-pointers and the Mavericks, with only three turnovers, beat the Utah Jazz 110-104 in Game 2 on Monday night.

In danger of dropping the first two games after opening the playoffs with home-court advantage for the first time since their NBA title 11 years ago, the Mavericks even overcame a 10-point deficit after halftime.

Kleber, who had made only 19% of his 3-point attempts since the All-Star break, was 8-of-11 from beyond the arc and put the Mavs ahead to stay with 4:21 left, then added another 3 on the next possession.

"I started this morning, I was talking to (Dorian Finney-Smith) and I told him, ‘Doe, I’m going to let 10 3s fly tonight.’ And he said, ‘That’s my dog.’ And that kind of set the tone for the day," Kleber said. "The mindset is we know they’re going to leave certain guys open to shoot. We’ve just got to let it fly."

Game 3 is Thursday night in Utah, where Dallas has lost its last 11 games.

"We did what we had to do, which was win tonight. But we were only focused on tonight," Mavericks coach Jason Kidd said. "We understand what’s in front of us, what’s coming. It’s going to be a hostile environment."

Brunson, the starting point guard with Doncic out, became the fifth Dallas player to score 40 points in a playoff game. He is the first Mavericks player to do that without committing a turnover. The other 40-point scorers were Doncic, Dirk Nowitzki, Rolando Blackman and Nick Van Exel.

Donovan Mitchell had 34 points for Utah, while Bojan Bogdanovic had 25 and Jordan Clarkson 21. Rudy Gobert had eight points and 17 rebounds.

Dallas had led only once in the second half until a 10-0 run capped by a go-ahead 3 by Finney-Smith and a jumper by Brunson. Royce O'Neale then hit a tying 3-pointer and Mitchell made a short jumper to put Utah back in front before Kleber's back-to-back 3s.

"The telltale is we can’t have Brunson have the night he had and also be able to kick the ball out for those looks," Jazz coach Quin Snyder said. "And when those passes are kicked out, I thought we weren’t as sharp mentally in our ability to rotate. And that’s something that we’ve done before."

Doncic was still out because of a strained left calf he suffered in the regular season finale eight days earlier. Kidd said before the game that the 23-year-old All-Star was making progress, "definitely going in the right direction" and doing more each day.

"I’m just playing how the defense is giving me, just seeing how they’re defending certain things. Just stepping into certain shots," Brunson said. "Yeah, the 5-of-5 start is great, but I had the same mentality when I was 0 for 5 last game, or whatever. ... You can’t fluctuate whenever, not even when (Doncic) is in or out. Because you need guys to make plays."

Jazz: Utah wiped out a five-point deficit in the final minute of of the first quarter to tie the game at 24. The sequence started with Gobert’s putback dunk. The 7-foot-1 center, the NBA’s top defensive player three of the previous four seasons who finished third for this season’s award announced earlier Monday, then had a block before a 3 from Clarkson, who

Mavericks: The Mavs finished 21 of 41 on 3s (51.2%) and shot 50% overall (36 of 72). ... Spencer Dinwiddie had all three Dallas turnovers, two on plays that could have easily been fouls against Utah. He had 17 points and six assists. ... Dallas led the NBA during the regular season with 17 wins after coming back from deficits of at least 10 points.

Brunson, whose previous high was 34 points during his rookie season, is in the final year of his rookie deal and is unsigned past this season. The former NCAA championship guard at Villanova was drafted in 2018, the same year as Doncic.

"He’s going to make a lot of money. I don’t know if he needs an agent, but I’ll put my name in the hat," Kidd said, apparently not aware that Brunson has the same agent as Doncic. "It’s not just what he did tonight. It’s not what he’s going to do going forward. He’s already done the work. He’s showing that he deserves to be paid. He does his job at a very high level, and he’s a winner.