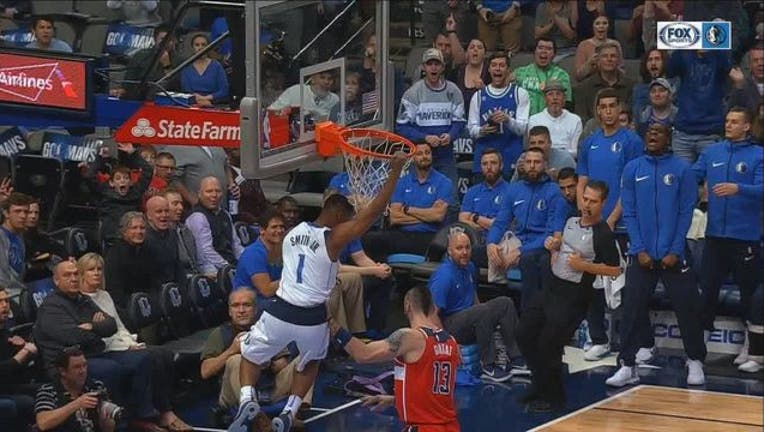 The Mavericks slowed a recent slide that had them headed back to the bottom of the Western Conference, ending their second three-game losing streak since the start of January.

The Mavericks held the high-scoring backcourt of John Wall and Bradley Beal to 28 percent shooting. Beal scored 18 and Wall had 11 - the only double-digit scorers for the Wizards - as the guards combined to go 8 of 29 from the field.

Wall missed all four of his 3-point attempts as Washington went 7 of 32 from long range (22 percent) and shot 31 percent overall. The Wizards had their second-lowest point total behind a 116-69 loss at Utah in December.

The Mavericks held an opponent to season lows in points in the first half (37) and the game.

Dirk Nowitzki had just two points when he converted a four-point play to start the fourth quarter to give Dallas its biggest lead to that point at 75-54.

Nowitzki, who finished with eight points and nine rebounds, hit his 3 before the foul by Mike Scott from the same left corner where Yogi Ferrell connected at the third-quarter buzzer. Ferrell scored 14 points along with Wesley Matthews, who was 4 of 8 from 3-point range.

Smith, who also had a game-high six assists, scored his first points on a 360-degree dunk and later in the first half soared between Wall and Otto Porter Jr. for a layup.

Wizards: F Markieff Morris and coach Scott Brooks got technicals in the first half. Morris was complaining about no-calls on fouls after he was called for one when he knocked the ball loose as Smith was going up for a dunk on a 3-on-1 break. Brooks got his in the final seconds of the half, not long after Morris was called for an offensive foul. ... Porter left with a right hip strain and didn't return.

Mavericks: C Salah Mejri was ejected after getting two technicals when he kept arguing with official David Guthrie despite Matthews trying to push him away. Rick Carlisle wasn't happy with Mejri, yelling at him to get off the floor when Mejri tried to tell his coach he didn't say anything. "Yeah you did," Carlisle shot back. ... J.J. Barea was called for a technical while he and Wall exchanged words following a foul on Barea in the fourth quarter. ... G Devin Harris is in the concussion protocol and missed the game. He was injured in Saturday's loss at Portland.

Wizards: At Oklahoma City on Thursday in fourth game of five-game trip, tied for their longest of the season. The teams will finish the two-game season series five days later in Washington.