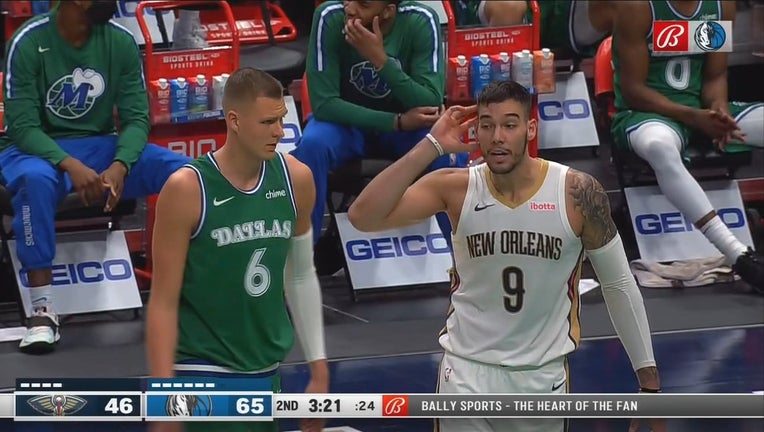 DALLAS - Luka Doncic and the Mavericks are a big step closer to avoiding the play-in tournament in the Western Conference.

The young Dallas sensation scored 33 points, Kristaps Porzingis added 19 in his return from injury and the Mavericks kept one of the inside tracks to a top six spot in the West with a 125-107 victory over the New Orleans Pelicans on Wednesday night.

"This is all anybody’s talking about, the play-in and not the play-in and all that," Dallas coach Rick Carlisle said. "It’s permeated the internet. The refuge is to play the games. And hopefully play them well. We’re one step closer."

The Mavericks (41-29) can clinch at least the sixth seed in the West with a win in either of their two remaining regular-season games against a pair of eliminated teams in Toronto and Minnesota.

Dallas, which bounced back a night after a blowout loss in Memphis, also avoids the play-in tournament with a loss by the Los Angeles Lakers. LA kept its top six hopes alive with a 124-122 victory over NBA-worst Houston.

The Mavericks are tied with Portland at No. 5, but the Trail Blazers hold the tiebreaker. Portland beat West-leading Utah 105-98 on Wednesday night.

"I'd be lying if I said we weren't paying attention to that stuff," said Tim Hardaway Jr., who scored 27 points. "We definitely knew we had to get back on track and get this win."

Eric Bledsoe and Jaxson Hayes scored 15 points apiece for the Pelicans, whose hopes took a huge hit last week when the club announced Williamson was out indefinitely. Williamson and Ingram have averaged a combined 51 points per game.

A night after matching his season low with 12 points against the Grizzlies, Doncic scored 16 points on a 33-8 Dallas run that broke a 30-all tie starting with the final bucket of the first quarter.

The young Dallas sensation was 5 of 5 from 3-point range in the second quarter, when the Mavericks scored a season-high 45 points. Doncic finished 7 of 15 beyond the arc and had eight rebounds and eight assists, including back-to-back alley oop dunks for Porzingis and Tim Hardaway Jr.

"They outscored us 79-50 in the middle two quarters," Pelicans coach Stan Van Gundy said. "They just crushed us. Luka was unbelievable. When he’s shooting the ball like that, they get really, really hard to guard."

Porzingis shot 7 of 14 after missing 10 of 11 games, the first three because of a sprained right ankle. Right knee soreness forced him out early in the only game he did play in that stretch before the 7-foot-3 Latvian missed seven more.

"I felt good right away," Porzingis said. "I’ve been kind of staying active with the basketball stuff and shooting as much as I can and making sure I’m visualizing being out there and playing. Tonight was pretty good."

With Rick Carlisle saying Porzingis was on a minutes restriction the coach wouldn't specify, the 2018 All-Star played 22. Porzingis sat the entire fourth quarter after the Mavericks took their biggest lead at 31 points (111-80) after three.

"I thought his rhythm looked surprisingly good for a guy that's been out close to two weeks," coach Rick Carlisle said. "It's pretty clear that we need him."

Pelicans: Van Gundy didn’t say whether Ball was finished for the season. ... Hayes went the locker room late in the third quarter after taking a tumble into one of the courtside advertising boards but returned in the fourth. ... Naji Marshall didn't return after injuring his right shoulder in a collision with Dorian Finney-Smith early in the fourth quarter. ... Willie Hernangomez had 12 points and 10 rebounds.

Mavericks: Dwight Powell had 12 points and eight rebounds. ... The five 3s by Doncic in the second quarter tied his career high for any quarter. He had five in the first quarter against Golden State in November 2019. ... Over his past eight games, Hardaway is averaging 26 points while shooting 56% overall and 49% from long range.

JJ Redick, the centerpiece of a Dallas-New Orleans deal at the trading deadline to give the Mavericks a boost at the 3-point line, didn't get to play against his former team. The shooting guard is out at least the rest of the regular season with right heel soreness that kept him out of 18 consecutive games before and after the trade. Redick aggravated the injury against Memphis.