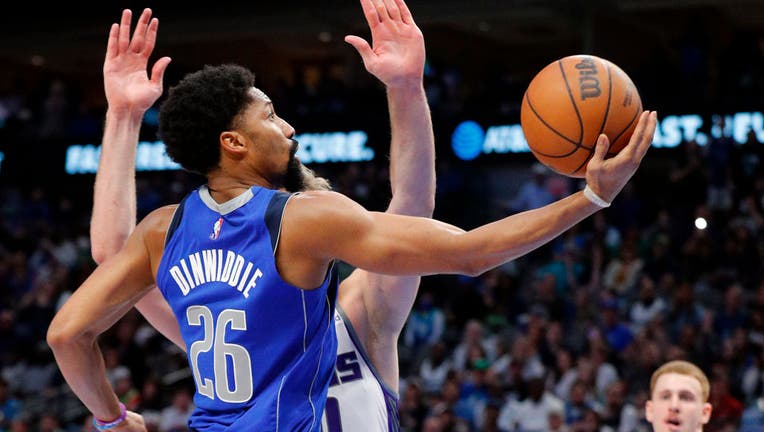 DALLAS, TEXAS - MARCH 05: Spencer Dinwiddie #26 of the Dallas Mavericks goes up for a shot against the Sacramento Kings in the second half at American Airlines Center on March 05, 2022 in Dallas, Texas. NOTE TO USER: User expressly acknowledges and a

DALLAS (AP) - Dorian Finney-Smith hit a 3-pointer from the right corner with 3.3 seconds left and the Dallas Mavericks, playing without All-Star guard Luka Doncic, overcame a 19-point deficit for the second time this week to beat the Sacramento Kings 114-113 on Saturday.

Spencer Dinwiddie scored a season-high 36 points in his first start for Dallas since being acquired from Washington on Feb. 10. Jalen Brunson added 23 points and assisted on the winning basket, driving the length of the court before passing to Finney-Smith for a 114-111 lead.

The Kings had a chance to tie it in the closing seconds, but Harrison Barnes’ 30-footer went off the rim and Justin Holiday converted the miss for a layup for the game’s final points.

Dallas trailed by 19 at Golden State last Sunday before rallying for a 107-101 victory. The Mavericks have won five straight.

De’Aaron Fox matched a career high with 44 points, and Domantas Sabonis added 15 points and 10 rebounds for the Kings. The Kings finished a five-game trip 2-3.

Doncic was listed on the injury report as having a left toe sprain. Coach Jason Kidd wouldn’t elaborate on the injury. It was the first game Doncic has missed since Jan. 7 and the 16th this season. Dallas is 6-10 without the 23-year-old four-time All-Star.