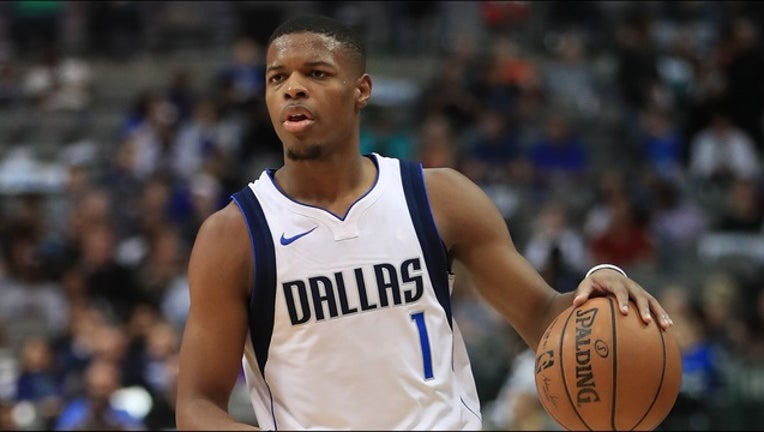 Dennis Smith Jr. of the Dallas Mavericks in the first half at American Airlines Center on November 29, 2017 in Dallas, Texas. (Photo by Ronald Martinez/Getty Images)

The Dallas Mavericks traded away Dennis Smith Jr. to the New York Knicks on Thursday in a multiplayer deal that sends Kristaps Porzingis to Dallas.

The 7-foot-3 Porzingis was the No. 4 pick in the 2015 draft and once was expected to be the Knicks' franchise player for years. But they declined to give him a contract extension last summer, and now by trading him and Hardaway seem instead to be gearing up to pursue players in free agency.

Hardaway has two more years and about $37 million left on his contract, and moving that was necessary if the Knicks were going to find a way to open the most cap space possible.

New York (10-40) has the worst record in the NBA and is headed toward landing a high pick in the draft. Then the Knicks will be set up to be big spenders -- perhaps for two top players -- in a free agent market that could include Kevin Durant, Kawhi Leonard, Kyrie Irving and more.

But they won't have Porzingis, who they once believed was the kind of talent who could help attract those players. The Latvian has 3-point range on offense and shot-blocking skills on defense, and had made his first All-Star team just before tearing his ACL after a dunk against Milwaukee on Feb. 6.

The Knicks had said he would undergo further testing the middle of next month that could determine whether he would be cleared to return again this season.

If he does, it will be in Dallas, where he could form an intriguing international frontcourt with rookie Luka Doncic. Both played professionally in Spain before coming to the NBA as top-five picks.

The most intriguing player in the deal from the Knicks' standpoint is Smith, the point guard they passed on with the No. 8 pick in 2017 when they instead took Frank Ntilikina. The Mavericks took Smith one pick later, and he posted the second triple-double of his career Wednesday when Dallas won at Madison Square Garden.

Jordan is a former U.S. Olympian and top defensive center, but if it's unclear if the Knicks will hold onto him. They are focused on playing their young players, so could look to move Jordan. The trade deadline is next Thursday.