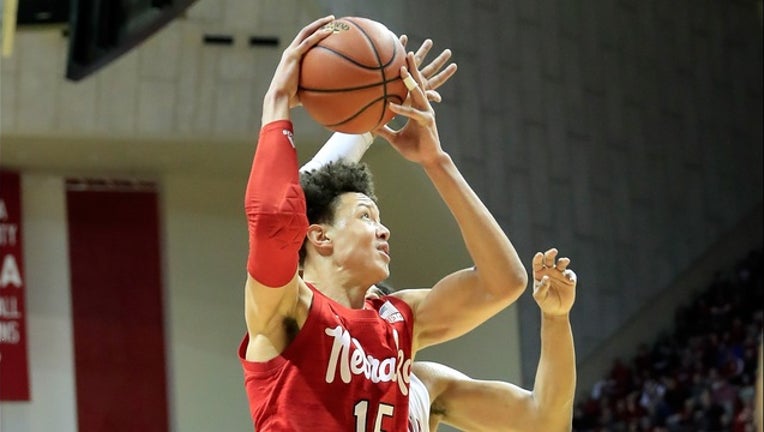 BLOOMINGTON, IN - JANUARY 14: Isaiah Roby #15 of the Nebraska Cornhuskers shoots the ball against the Indiana Hoosiers at Assembly Hall on January 14, 2019 in Bloomington, Indiana. (Photo by Andy Lyons/Getty Images)

DALLAS (AP) - The Dallas Mavericks traded down in the second round of the NBA draft on Thursday night, ending up with Nebraska forward Isaiah Roby at No. 45.

Dallas initially selected Deividas Sirvydis of Lithuania with their scheduled 37th pick, but agreed to trade his rights to the Detroit Pistons for Roby and two future second-round picks, according to a person with knowledge of the deal. The person spoke on condition of anonymity to The Associated Press because the trade was not yet official. Trades can't be completed until the new league year starts July 6.

Dallas, which traded its first round pick to Atlanta as a result of last year's draft-day trade for Luka Doncic, now brings in Roby, who averaged 12 points and seven rebounds per game for the Cornhuskers.

The 6-foot-8 Roby will join a young Mavericks team led by 20-year-old Doncic, likely to the NBA's Rookie of the Year, and 23-year-old Kristaps Porzingis, acquired during the season from the Knicks and coming off a knee injury.

Roby played 97 games over three years at Nebraska before skipping his final year of eligibility to enter the draft. He started all 35 games for the Huskers, who finished 19-17 and made a run to the quarterfinals of the Big Ten Tournament.

Mavericks general manager Donnie Nelson said earlier Thursday he expected the late first round and early second round of the draft to be among the most active in recent years, and that the Mavs could be part of that frenzy.

"Once you get closer (to selecting), if there's a player that a team covets, there's a flurry of phone calls," Nelson said. "Sometimes the price goes up, sometimes it goes down. I think you're going to see a lot of stuff happen in the 20s and the top half of the second."

Nelson proved to be accurate, netting his team two future picks in the process.

Dallas finished 33-49 last year and hasn't made the playoffs since 2015-16. The Mavericks will play their first season since 1997 without Dirk Nowitzki. The 21-year veteran and the NBA's sixth-leading scorer all-time retired following this past season.