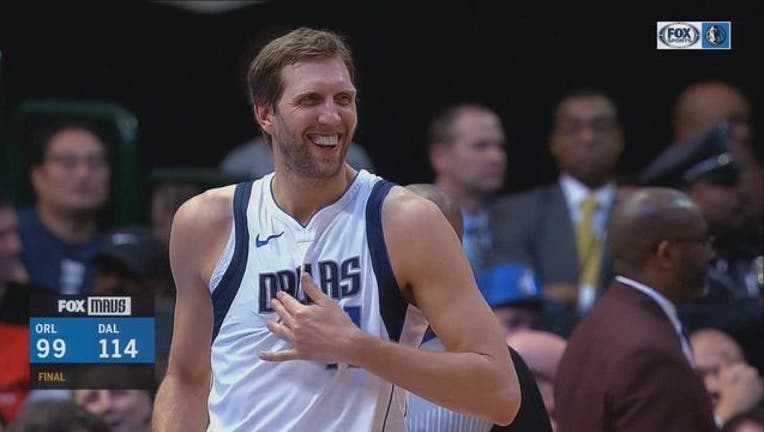 Wesley Matthews had 16 points for Dallas, which got its first win since Dec. 31 against Oklahoma City. Harrison Barnes and Yogi Ferrell scored 15 points apiece, and J.J. Barea had 12 assists and eight points.

Mavericks coach Rick Carlisle earned his 708th career win, moving past John MacLeod for 17th in NBA history. Next up for Carlisle is Gene Shue, who has 784 wins.

Aaron Gordon scored 19 points for Orlando, which has lost five in a row. D.J. Augustin had 18 points, and Marreese Speights finished with 13 points and 10 rebounds.

The Magic led 48-43 at halftime, but Nowitzki and Smith helped the Mavericks rally with 15 points apiece in the second half.

Leading 66-64 with 4:04 remaining in the third quarter, Ferrell made a pull-up jumper and Barnes followed with another jump shot. The Mavs carried an 82-75 lead into the fourth.

The Magic pulled within four in the final period before the Mavericks closed out the game with a 14-3 run in the final four minutes.

Dallas shot 51.8 percent from the floor. Orlando shot 45.6 percent and had 13 turnovers in sloppy offensive performance.

Mavericks: Dallas has not lost a regular-season series to Orlando since the 1997-98 season. The final scheduled meeting between the teams is April 4 in Orlando.