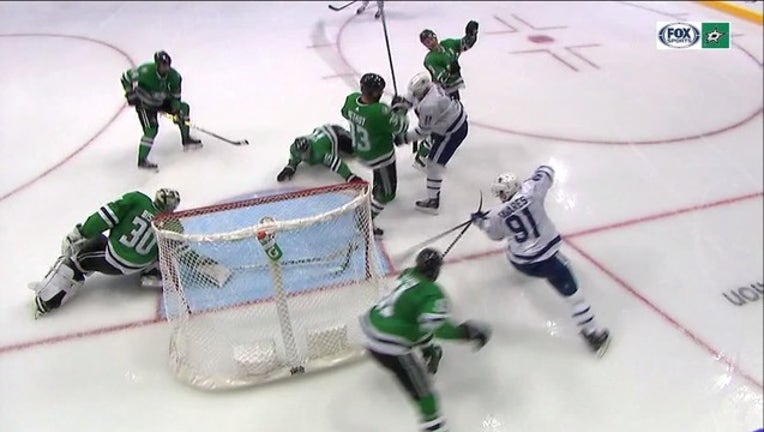 DALLAS (AP) - John Tavares and the Toronto Maple Leafs are just getting used to each other.

Tavares and Auston Matthews each had two goals, and the high-scoring Maple Leafs beat the Dallas Stars 7-4 on Tuesday night.

Toronto defenseman Morgan Rielly had a career-high four assists after he scored the winning goal in Sunday night's 7-6 overtime win at Chicago. Mitchell Marner had a goal and three assists as the Maple Leafs improved to 2-0 on a four-game trip.

Led by Matthews and Tavares, Toronto has won three of its first four games, averaging five goals per contest. Matthews has seven goals and three assists already. Tavares, who signed a blockbuster deal with his hometown Maple Leafs this summer, has scored five of his six goals in the past two games.

"When it's always going in, it's always a really good feeling," Matthews said. "You want to continue to generate chances because it's going to get harder and harder as the season goes along."

Tyler Seguin had a goal and three assists for Dallas, and Alexander Radulov finished with a goal and two assists.

Frederik Andersen had 30 stops for the Maple Leafs.

The Leafs grabbed control by scoring three times in the last 8:01 of the second period for a 5-2 lead. Matthews and Tavares scored on the power play, and Ron Hainsey put in a shot from the blue line at even strength for his first goal this season.

"What I like about the power play is we're not trying to make any highlight-reel plays," Tavares said. "I think we're just kind of sticking with our structure and what we believe is going to work for us."

Toronto was 2 for 3 on the power play.

"We have to do a better job killing penalties than we did tonight," Stars coach Jim Montgomery said. "We made it too easy. They make it hard on you. Those were some really nice goals they scored."

The Stars had 17 giveaways by 12 different players.

"Their speed and their creativity forced those mistakes," Montgomery said. "Our execution wasn't where it needed to be against a real good hockey club."

Marner scored unassisted at 9:40 of the first period, putting the Stars behind for the first time this season.

Dallas tied it at 17:23. Seguin passed ahead to Radulov inside the right faceoff circle, and he sent a low wrist shot past Andersen into the left corner of the net.

The Stars tied it again at 9:04 of the second. Esa Lindell sent a long pass to Seguin in the neutral zone. He outmaneuvered Hainsey and skated in alone on Andersen for a wrist shot inside the right goalpost.

Matthews put Toronto in the lead to stay 39 seconds into the game's first power play, at 11:39.

Stars defenseman John Klingberg scored 2:39 into the third, but Tavares converted a wraparound at 4:55 to restore the two-goal margin. Connor Brown added an empty-net goal at 16:40.

NOTES: Matthews has scored two goals in three games this season. The power-play goal was his second. ... RW Valeri Nichushkin (lower-body injury) made his season debut. He was playing for the Stars for the first time since 2015-16 after playing the last two years in Russia. ... Toronto C Frederik Gauthier played in his first game this season.

Stars: Conclude their season-opening four-game homestand against Anaheim on Saturday.