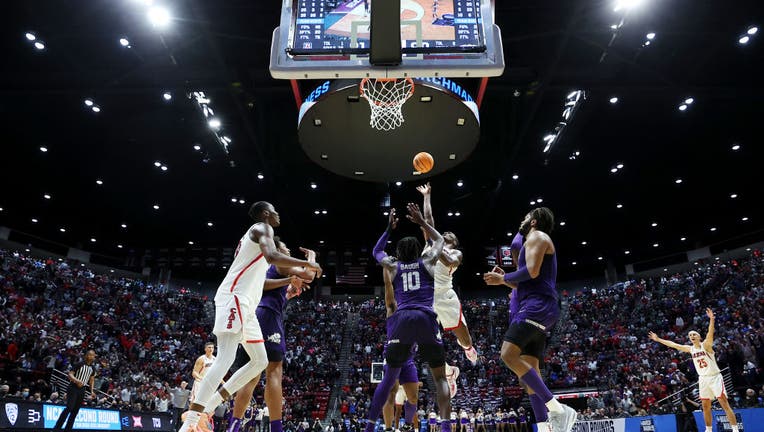 SAN DIEGO, CALIFORNIA - MARCH 20: Bennedict Mathurin #0 of the Arizona Wildcats shoots the ball during overtime against the TCU Horned Frogs in the second round game of the 2022 NCAA Men's Basketball Tournament at Viejas Arena at San Diego State Univ

SAN DIEGO - Bennedict Mathurin has come through plenty in clutch situations for Arizona. It's no surprise he made his biggest plays of the season when the Wildcats needed him the most.

The sophomore shooting guard made a 3-pointer to force overtime and then scored six more points in the extra session as the top-seeded Arizona outlasted ninth-seeded TCU 85-80 on Sunday night in the second round of the NCAA Tournament.

Mathurin, the Pac-12 Player of the Year and a second-team AP All-American selection, finished with 30 points. After Kerr Kriisa missed a 3, Mathurin was able to wrestle  the ball away from TCU's Emanuel Miller in the paint and put it in to give the Wildcats an 83-80 lead with 1:11 remaining.

After getting the rebound and making the basket, Mathurin did a couple fist pumps near the baseline.

"My coaches were getting on me for not getting enough rebounds. I was pretty happy about getting the offensive rebound," said Mathurin, who is the sixth Arizona player to score at least 30 points in an NCAA Tournament game. "So I just went out there and got the rebound, made it. And I was emotional."

Christian Koloko added 28 points and 12 rebounds, including a putback dunk that slammed the door on the Horned Frogs with 9 seconds left in OT.

Mathurin even got off to a slow start. He was 2 of 9 before making six of his last 10.

"Ben’s not afraid of the moment. He’s a special player who has an ability to rise up another level when needed. He has that clutch gene," Arizona coach Tommy Lloyd said. "I honestly felt really good when he had the ball in hands there. I knew he was going to shoot a 3. Right when he snapped that 3 off to tie it, it was pretty impressive."

Mathurin and Koloko did enough though for the Wildcats (33-3) to avoid becoming the second No. 1 seed to fall during the second round. They advanced to Thursday's South Region semifinals in San Antonio, Texas, where they will face fifth-seeded Houston.

"I mean, it was simple, it was win or go home," Koloko said. "That’s not the first time we were down. We knew we had to keep playing our game. Coach trusted us and told us, you’ve got to hang in there. That’s what we did. We didn’t panic. We played our game and we came back."

Chuck O’Bannon Jr. had a career-high 23 points for TCU (21-13) while Mike Miles Jr. and Eddie Lampkin Jr. had 20 apiece. The Horned Frogs were looking to get to the Sweet 16 for the first time.

"This season was everything for us because we weren’t even expected to be here. And for us to win our first game and be that close with the No. 1 seed just shows that we have a bunch of guys with a lot of grit," O'Bannon said.

TCU still had a chance to win in regulation after Mathurin's big shot, but Miles lost the ball near midcourt. Dalen Terry tried for a game-ending dunk but he didn't get the shot off before time expired.

TCU trailed by eight points with less than eight minutes remaining and had missed 12 straight shots before scoring 12 straight points to go up 69-67 with 3:39 remaining. O’Bannon scored the first five points and Miles had the last four.

The Horned Frogs held Arizona scoreless for 5:09 before Terry’s 3 from the right corner tied it at 70.

"I’m so proud of them. TCU basketball, I told them I think they made millions of fans by watching this game," Dixon said.

Kriisa had three points in 27 minutes off the bench after missing the past three games.

The sophomore point guard’s season looked to be over after he suffered a sprained ankle when he collided with Koloko in the final minute of a Pac-12 Tournament quarterfinal matchup against Stanford on March 10.

He missed his first five shots before hitting a 3-pointer from the left corner that began a spurt of nine straight Arizona points to give it a 67-58 advantage.

"For him to give us 26 minutes — our trainer, Justin Kokoskie, did an amazing job getting him available to play. That was a real sprained ankle. That was no tweak," Lloyd said.

TCU: The Horned Frogs got their first NCAA Tournament victory in 35 years on Friday night, but Jamie Dixon's dream of a deep run for his alma mater will have to wait at least another year.

Arizona will face Houston for the first time since 2009. It will be the teams' first meeting in the NCAA Tournament.