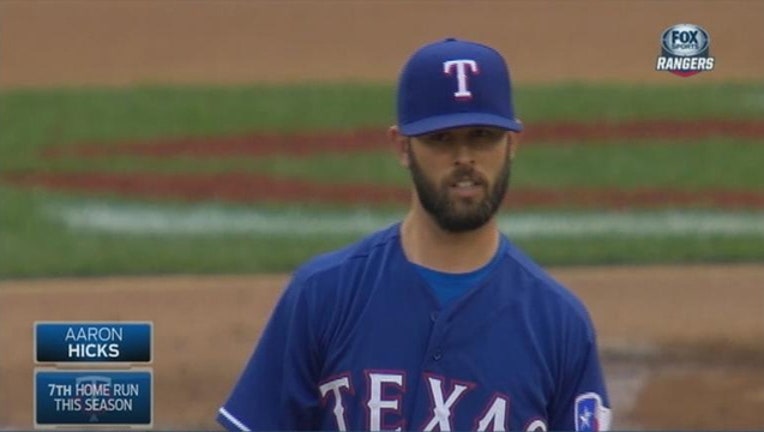 The Minnesota Twins made sure the struggling Texas Rangers' starter never got the chance to implement any of those adjustments.

Aaron Hicks had four of Minnesota's 17 hits, Miguel Sano homered twice and Mike Pelfrey picked up his first win since June as the Twins routed Texas 11-1 on Wednesday night.

Hicks lead off the game with a homerun on a 2-0 fastball, and Sano had two homers in the first four innings as Martinez couldn't get out of the fourth to lose for the fifth time in six decisions.

"I recognized the adjustment I need to make," Martinez said. "I just couldn't get to those adjustments."

"He could get ahead of some hitters and then couldn't quite find the range with the breaking ball," Rangers manager Jeff Banister said. "Didn't seem like he had a really good feel for it and then when he had to go to the fastball, the fastball seemed to be up in the zone."

On the other side, Texas could only muster four hits and a run off of Pelfrey, who had gone 0-5 with a 6.22 ERA in his last 10 starts. Pelfrey (6-7) didn't allow a baserunner until Shin-Soo Choo's one-out double in the fourth as the Rangers lost for the fourth time in five games.

Texas bunched three hits for a run in the sixth, but Twins left fielder Eddie Rosario threw out Choo at the plate to end the threat.

"We're at the time of the year, we need to string them together," Banister said. "I believe it's five straight series wins. Going to Seattle and some tough ballgames, tough ballgame last night, this one is not typical. They do happen, but it's one we don't need at this time of year."

The Rangers hadn't fallen behind by big deficits too often lately, even during a tough stretch.

Wednesday snapped a streak of 19 consecutive games in which Texas had held a lead. The streak is the second longest in the majors this season behind Toronto's current streak of 26 games, according to STATS Inc., which said it's the longest run of leads since the Rangers had a span of 23 straight games with a lead in 2006.

Rangers: Josh Hamilton was scratched from the lineup about an hour before the game with a sore left knee, after taking batting practice and experiencing discomfort. Ryan Strausborger replaced Hamilton in LF and was inserted in the ninth spot, with Elvis Andrus, Rougned Odor and Bobby Wilson each moving up one position.

Twins: LHP Tommy Milone (strained left elbow) will throw in the bullpen Thursday and if all goes well will be activated from the DL when he's eligible Monday. But there's an opening for a starter Saturday against Cleveland. Kyle Gibson has volunteered to pitch on three days' rest, which Molitor said he didn't want to do. Someone could be called up from Triple-A Rochester instead.

Rangers: Rookie RHP Chi Chi Gonzalez was picked to start Thursday and fill the spot of Cole Hamels (sore left groin) in the rotation. Gonzalez, who posted a 2-4 record and a 3.74 ERA over seven starts prior to the All-Star break, will be recalled from Triple-A Round Rock. Someone on the staff will have to be sent down, but manager Jeff Banister declined to speculate about the options.

Twins: RHP Ervin Santana (2-3, 5.40 ERA) will take the mound for the series finale, looking to break a three-start losing streak.