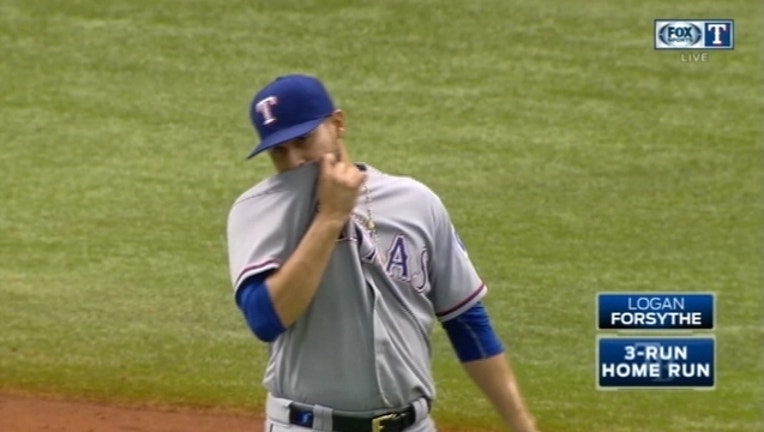 ST. PETERSBURG, Fla. (AP) — Logan Forsythe homered after missing four games due to back spasms, and the Tampa Bay Rays took two of three from the AL West-leading Texas Rangers with an 8-4 victory on Sunday.

Forsythe hit an opposite-field, three-run shot off Martin Perez (8-9) during a five-run fourth that made it 6-2. He has six homers in his last 10 games.

Tampa Bay, last in the AL East, has won six of seven. The Rays have outscored their opponents 55-18 during the stretch.

Delino DeShields hit a two-run homer in the third inning and Drew Stubbs had a solo drive in the fifth for the Rangers, who have lost nine (1-9-2) of their last 12 regular-season road series against the Rays. Texas beat Tampa Bay in the 2010 and 2011 ALDS, going a combined 5-0 at Tropicana Field.

Perez, 1-8 on the road this season, gave up six runs, five hits and three walks over six innings.

Steven Souza Jr. put the Rays up 8-4 on a two-run homer in the eighth.

Rangers manager Jeff Banister said Carlos Gomez, signed to a minor league contract Saturday, will primarily start in left field. "This guy can take over a game," Banister said. The move allows Jurickson Profar to move into a utility role. It has not been determined if the Gomez will join the team from Triple-A Round Rock during a series at Cincinnati that starts Tuesday night.