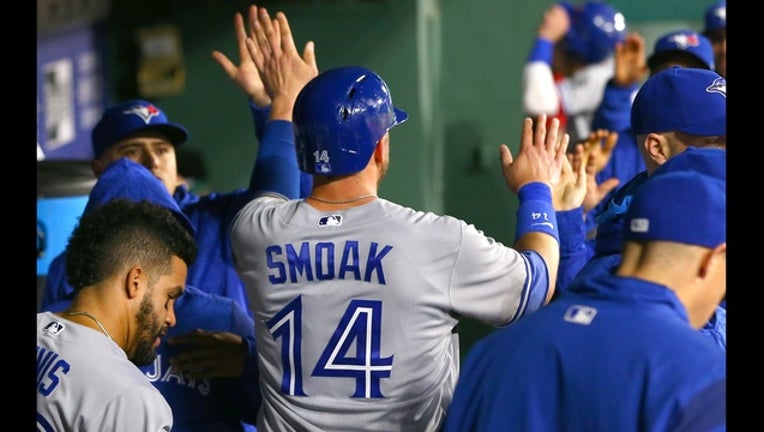 ARLINGTON, TX - APRIL 06: Justin Smoak #14 of the Toronto Blue Jays is congratulated for storing in the third inning against the Texas Rangers at Globe Life Park in Arlington on April 6, 2018 in Arlington, Texas. (Photo by Rick Yeatts/Getty Images)

ARLINGTON, Texas (AP) - Russell Martin homered and hit a pair of RBI singles to back six solid innings from Marco Estrada, and the Toronto Blue Jays beat the Texas Rangers 8-5 on Friday night.

Martin's drive to left field for an 8-0 lead in the sixth came right after Yangervis Solarte connected on a solo shot . It was the second homer of the season for both in a game delayed 36 minutes at the start by rain.

Estrada (1-0) took a two-hit shutout into the sixth before Shin-Soo Choo homered for the third straight game. After two singles and a walk with two outs, Estrada got Robinson Chirinos on a flyout on the right-hander's 105th and final pitch.

Twice a dominant winner in Arlington when Toronto beat Texas in back-to-back AL Division Series in 2015-16, Estrada allowed five hits and a run with a walk and seven strikeouts.

Roberto Osuna allowed two singles but got Choo to ground into a double play in a scoreless ninth for his third save.

Matt Moore (0-2) had his second straight rough start for the Rangers after leading the NL with 15 losses last season in San Francisco. The left-hander allowed five hits, four walks and six runs - five earned - in 3 1/3 innings. Moore also hit Martin with a pitch.

Josh Donaldson drove in a run among two singles and scored twice, and Solarte walked his first three times up.

A day after becoming the Latin American leader in hits, Adrian Beltre had three more to break a tie with Rickey Henderson for 24th on the career list and is now at 3,058. He and Choo each doubled in a run in a four-run seventh. Elvis Andrus added an RBI single, his third hit.

The Rangers traded C Brett Nicholas to San Diego for a player to be named or cash. Nicholas, who had been at extended spring training with the Rangers, was assigned to the Padres' Triple-A affiliate in El Paso.

Rangers: Chirinos returned after injuring his wrist on a tag at the plate Wednesday in Oakland. He likely would have been out of the lineup anyway for Thursday's day game after a night game. Chirinos said he didn't feel the need for an X-ray.

Blue Jays: RHP Marcus Stroman (0-0, 7.20 ERA) gave up seven runs in four innings in his first regular-season appearance at the home of the Rangers last season, an 11-4 loss. He also lost Game 2 of the AL Division Series in Arlington in 2015.

Rangers: LHP Mike Minor (0-1, 3.86) gave up three hits and two runs in 4 2/3 innings in his Texas debut and first major league start since 2014, an 8-2 loss to Houston. He was a starter in Atlanta before shoulder surgery sidelined him for two years. Minor returned as a reliever in Kansas City last season.