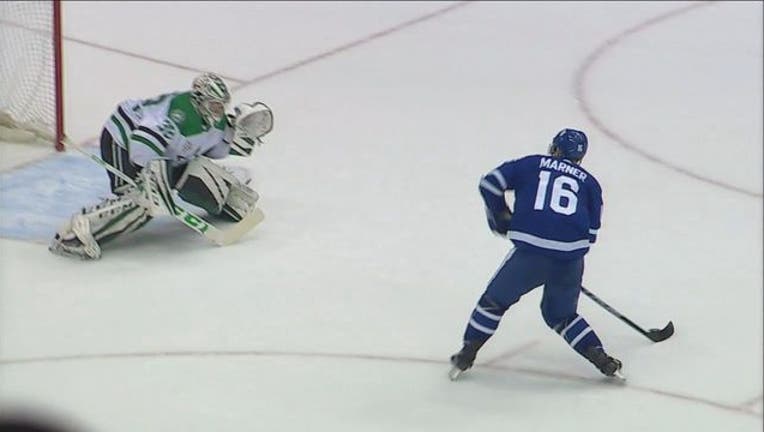 TORONTO (AP) - Mitch Marner scored the winner in the shootout to lift Toronto to a 6-5 victory over the Dallas Stars on Wednesday night, extending the Maple Leafs' franchise-record home winning streak to 11 games.

Marner beat Kari Lehtonen in the third round of the shootout, completing Toronto's comebacks from 4-2 and 5-4 deficits in the third period.

James van Riemsdyk had his third career hat trick, and Nazem Kadri and Patrick Marleau also scored in regulation for the Maple Leafs. Frederik Andersen allowed three goals on 20 shots before getting lifted just past the game's midway point with an upper-body injury. Curtis McElhinney came on and stopped 13 shots - including two big saves on Jamie Benn during a power play in overtime - the rest of the way to help Toronto improve to 3-2-2 overall since star center Auston Matthews went down with a shoulder injury on Feb. 22.

Tyler Bozak, who also scored in the shootout, and Marner each added two assists to keep the Maple Leafs perfect at home since losing to Colorado on Jan. 22.

Tyler Seguin had a goal and two assists, Benn added a goal and an assist, and Radek Faska, Remi Elie and Brett Ritchie also scored in regulation for Dallas. Lehtonen made 26 stops through overtime.

After the Leafs stormed back with two goals in the third to tie it 4-4, Ritchie took a feed from Seguin and beat McElhinney with 6:42 remaining for his sixth goal of the season.

However, Marleau tied it with 15.3 seconds left in regulation when he tipped home Marner's shot for his 22nd to send the game to overtime.

Outshot 25-15 through what were a listless two periods after a jumping out to an early 2-0 lead, the Maple Leafs pulled to 4-3 at 5:13 of the third when van Riemsdyk softly flipped his second of the night and 28th of the campaign into the roof of Lehtonen's net.

Toronto got the game's first power play with about 10 minutes left in regulation, and van Riemsdyk scored his third goal of the night, and team-leading 29th of the season, at 10:43 off a hard pass from Marner.

Van Riemsdyk's three goals moved him past Matthews, who missed his 17th game of the season due to injury, for the team lead.

Tied 2-2 after the first period, the Stars came out flying to start the second - outshooting Toronto 9-1 - before Seguin gave his team its first lead at 4:30. The slick center took a quick shot off the rush, stepped around Maple Leafs defenseman Jake Gardiner and beat Andersen between the legs on the rebound for his 37th.

Andersen left the crease during a television timeout with 9:35 left in the second and went straight to the locker room.

Coming off back-to-back losses, including Tuesday's 4-2 setback in Montreal, the Stars made it 4-2 at 14:03 when Elie scored his sixth off a nice no-look feed from Devin Shore past a helpless McElhinney.

While the Maple Leafs are all but assured of finishing as the No. 3 seed in the Atlantic Division with the playoffs less than a month away, the Stars find themselves in a battle for a postseason spot in the tight Western Conference standings.

Toronto opened the scoring at 4:28 of the first when Kadri took advantage of Lehtonen's miscue in front to tap home his 27th.

The crowd at Air Canada Centre barely had a chance to get back in their seats before van Riemsdyk made it 2-0 just 25 seconds later when he banged in a rebound - also his 27th - off a scramble in front.

The Stars got on the board with the teams playing 4-on-4 with 5 1/2 minutes left in the first when Seguin beat Leafs defenseman Morgan Rielly to a puck in the corner off a faceoff and fed Benn, who got his 25th.

Dallas tied it 1:32 later when Greg Pateryn blasted a shot from the point that ticked off Faska in front for his 14th.

NOTES: Maple Leafs forward Andreas Johnsson made his NHL debut. ... Prior to the recent four-game slide, Toronto had won 14 wins in 17. ... Toronto D Nikita Zaitsev sat out for a second consecutive game with the flu. ... Stars D Marc Methot suffered a hand injury against Montreal and didn't dress. ... Dallas No. 1 goalie Ben Bishop missed his fifth straight outing with a lower-body injury.

Stars: At Ottawa on Friday night.