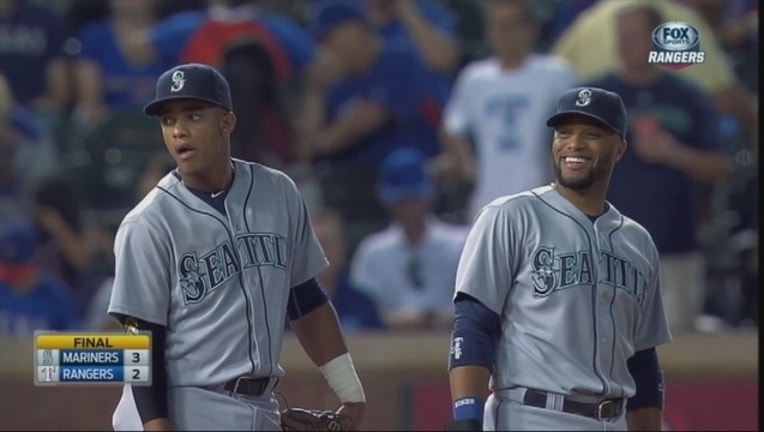 ARLINGTON, Texas (AP) — Hisashi Iwakuma followed his no-hitter by limiting Texas to two runs and five hits over seven innings as the Seattle Mariners beat the Rangers 3-2 on Tuesday night.

All of Seattle's scoring came in the first inning on three extra-base hits, including Seth Smith's 10th home run of the season.

Iwakuma (5-2) gave up a hit to Texas' second batter, a single by Shin-Soo Choo. He retired 12 straight at one point and struck out six while walking one.

All four times a Mariner has thrown a complete-game no-hitter, he has allowed a hit in the first inning of his next start.

Iwakuma is 6-0 in his last seven starts against Texas. One of the hits off Iwakuma was Rougned Odor's ninth homer of the year.

Carson Smith worked a perfect ninth to earn his 13th save in 16 attempts since becoming Seattle's closer in early June.

Cruz extended his streak of reaching base to 29 consecutive games, the longest in the American League this season.

Odor hit nine homers last season in 114 games and needed 81 games to do so this year.

Gonzalez won his first two starts after his initial call-up in late May. Since then, he has five losses and a no-decision.

Josh Hamilton missed his third consecutive game for Texas and fifth in the last seven with a sore left knee. Hamilton said he doesn't plan to play in Wednesday's series finale and hopes to return Thursday, when the Rangers open a four-game series at Detroit.

Mariners: LHP Charlie Furbush was scheduled to see a doctor Tuesday in Seattle. Furbush experienced biceps discomfort last Saturday in the bullpen in Boston and was sent home.

Rangers: LHP Derek Holland will make his first appearance after throwing only nine pitches on April 10 before being sidelined with a torn muscle behind his throwing shoulder. "I know what I need to do, and I'm ready to go," Holland said,