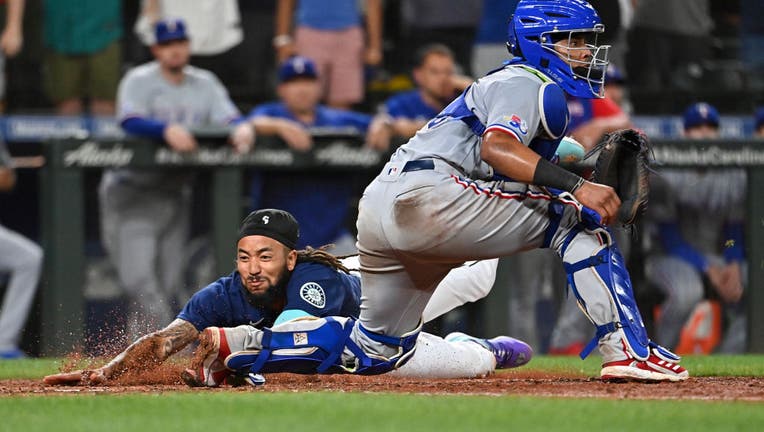 SEATTLE, WASHINGTON - JULY 26: J.P. Crawford #3 of the Seattle Mariners scores against Meibrys Viloria #60 of the Texas Rangers to tie the game in the ninth inning at T-Mobile Park on July 26, 2022 in Seattle, Washington. The Seattle Mariners won 5-4

SEATTLE - Cal Raleigh homered in the seventh inning, lined an RBI double in the ninth and scored the winning run on Carlos Santana’s sacrifice fly, and the Seattle Mariners rallied for a 5-4 win over the Texas Rangers on Tuesday night.

J.P. Crawford led off the ninth with a single off Texas reliever Brett Martin and scored from first when Raleigh lined a shot to the wall in right-center field. Raleigh was sacrificed to third base and after Martin (0-6) issued intentional walks to Julio Rodríguez and Ty France to load the bases, Santana hit a fly ball to center field that was deep enough for Raleigh to score the winning run.

Seattle won its seventh straight over the Rangers and its ninth consecutive game decided by one run. Since losing to Oakland on July 1, the Mariners are 16-3 with the only three losses coming last weekend to Houston.

Rodríguez led off the game with his 17th home run of the season in his first action since the All-Star Game last week. Rodríguez returned from Los Angeles complaining of a sore left wrist that was initially injured in the final game before the break in Texas.

Seattle was cautious but Rodríguez was clearly ready to return hitting the sixth pitch of the game out to left field.

"I’m not surprised at this point. It’s amazing what that guy is doing. I just shake my head in amazement," Raleigh said.

Kyle Lewis added an RBI single in the first inning, and Raleigh’s 14th homer in the seventh gave Seattle a 3-1 lead.

But Seattle’s bullpen sputtered late and the Rangers pulled ahead. Adolis García's two-run double in the eighth inning took an awkward bounce inside first base and pulled the Rangers even at 3-3 after Paul Sewald had walked Corey Seager and Jonah Heim with two outs.

Leody Taveras led off the ninth inning with an opposite-field single off Erik Swanson (1-0) on a pitch well out of the strike zone, moved to second on a sacrifice bunt and scored when Ezequiel Duran’s sinking line drive couldn’t be caught on a diving attempt by right fielder Sam Haggerty.

But the Mariners put together a final rally and improved to 23-12 in one-run games, while Texas fell to 5-23.

"We had a tough one last night, even tougher one tonight," Rangers manager Chris Woodward said. "We’re going to bounce back. We’re going to learn, we’re going to continue to grow from these things."

Seattle rookie George Kirby threw five shutout innings on just 51 pitches before being lifted. Kirby was on a limited pitch count after not throwing in the majors since July 8.

Texas starter Dane Dunning threw five innings and allowed four hits in his first start following a stint on the injured list due to an ankle issue. Dunning is now winless in his past 14 starts dating to early May.

With Dunning coming off the injured list, the Rangers optioned LHP Taylor Hearn to Triple-A Round Rock. Hearn has started a career-high 13 games this season and made 16 total appearances. Manager Chris Woodward said the Rangers will go with a five-man rotation and he sees Hearn’s best role as a length reliever out of the bullpen.

Seattle also made a roster move to bring back Kirby and optioned RHP Matt Brash to Triple-A Tacoma. But manager Scott Servais made it sound as if Brash will be back with the big league club sooner than later. Brash started the season in the rotation before being sent to the minors and working as a reliever. Brash has appeared in five games as a reliever after making five starts to begin the season.

The Mariners signed first-round draft pick Cole Young on Tuesday. The high school infielder took part in batting practice with the team and met with manager Scott Servais. Young was selected with the No. 21 overall pick out of North Allegheny High School in Wexford, Pennsylvania.

Rangers: RHP Jon Gray (7-4, 3.48) goes for his fourth straight win. Gray has been dominant of late, bringing a 13-inning scoreless streak into his 18th start of the season. Gray has struck out 14 and allowed five total hits over his past two outings.

Mariners: LHP Marco Gonzales (5-10, 3.74) has allowed five earned runs in each of his past two starts, including last Friday against Houston where he gave up three home runs to the Astros.