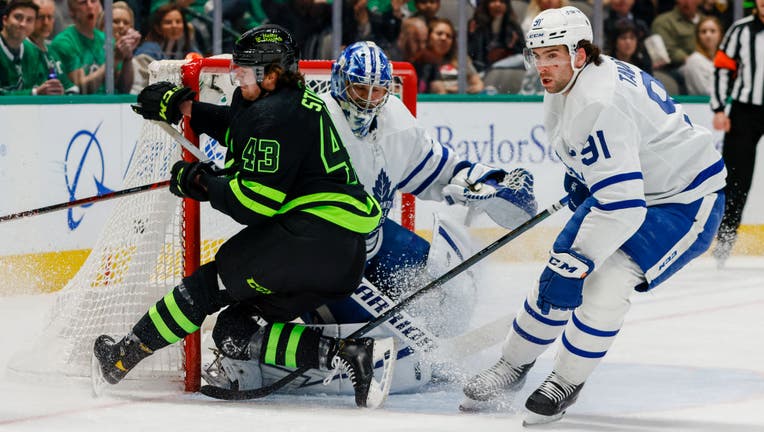 DALLAS - Auston Matthews has the most goals ever in a single season for the Toronto Maple Leafs — and the most in the NHL by an American-born player.

Matthews set the franchise record with his 55th goal in regulation Thursday night,

"This was Auston's night," coach Sheldon Keefe said. "It’s much deserved and to finish it with an exclamation point."

Matthews, who had tied Rick Vaive’s 40-year-old Maple Leafs mark of 54 goals two games earlier, broke that with his one-timer from the bottom of the circle to the left of goalie Scott Wedgewood after taking a pass back from Mark Giordano on a power play for a 2-1 lead with 1:02 left in the second period.

"I just laid it there for him and he just pounded it," Giordano said.

The game-winner winner came when he took a pass from William Nylander and was able to swipe the puck around Wedgewood 2:10 into overtime.

The 56th goal surpassed Jimmy Carson and Kevin Stevens, at 55 each, for the most by a U.S.-born skater. It also was Matthews' 52nd career multi-goal game, passing Pat LaFontaine's 51 for the most by a American-born player before age 25.

The 24-year-old from Arizona, the No. 1 overall pick in the 2016 draft, emphatically pumped his right arm when the puck got through a narrow gap between the goalie and the post on the record-setting 55th goal in the second period.

"I just saw the puck go in, and I was just so excited honestly," Matthews said. "There really was not that much else to it. (Giordano) made a really nice pass and he put it right in my wheelhouse, so I just tried to attack the puck and I was able to sneak it in. So it was a lot of stuff going through my mind."

Stars defenseman Miro Heiskanen swiped the puck away, but the record-breaker was retrieved and tossed to the Maple Leafs bench by Mitchell Marner, who grew up in the Toronto area.

"It's a hard thing to score a lot of goals in this league, and he’s made it look really easy," Marner said.

Dallas tied it at 2 with 14:17 left on a laser shot by John Klingberg on a pass from Joe Pavelski. The Maple Leafs went ahead 3-2 on Morgan Rielly's goal just less than five minutes later, but Pavelski tied it again on his 26th goal with 2:23 left in regulation.

Tyler Seguin scored his 21st goal for the Stars, who remained in the Western Conference's second wild-card spot through 70 games with 84 points — two points ahead of idle Vegas and with two games still in hand. Wild-card leader Nashville won earlier Thursday and has 86 points in 70 games.

Toronto is second in the Atlantic Division with 98 points in 71 games.

Matthews tied Vaive at 54 with three goals on Monday night at Tampa Bay, his fourth hat trick this season and eighth goal in a six-game scoring streak. He had three assists but no goals on eight shots at Florida the following night.

"A lot of guys when they get 50, they take a breath maybe for a game or two," Giordano said. "He’s actually turned it on even more. It’s impressive."

His record-breaking 55th goal came on his 10th shot against the Stars, and his game-winner the game on his 12th shot.

"I’ve played him a few times now. Got to tip your hat to some guys in the league and the skill that they have. They find him. They give him looks. He’s sitting in a goal scorer’s position," Wedgewood said. "The two goals he had, I didn’t give him much, but he found a way to get them in there."

Notes: Toronto got its first goal of the night during a sequence when Stars wing Marian Studenic slid into Jack Campbell, knocking the net behind the Maple Leafs goalie out of place. But play was never stopped and Nylander got his 28th goal of the season at the other end. ... Campbell stopped 15 shots. ... Wedgewood had 37 saves, including two when he was sprawled out face-first in front of the net — one time with the puck under his stomach when play was finally stopped, and another with the glove on his fully extended left arm covering it up. ... Pavelski has 70 points (26 goals, 44 assists) in 70 games. ... Jason Robertson's two assists for Dallas put him at 65 points (32 goals, 33 assists) in 62 games.

Toronto: After going 3-0-1 on their trip, the Maple Leafs play Montreal in the first of three consecutive home games.

Dallas: The Stars wrap up a three-game homestand Saturday against New Jersey.