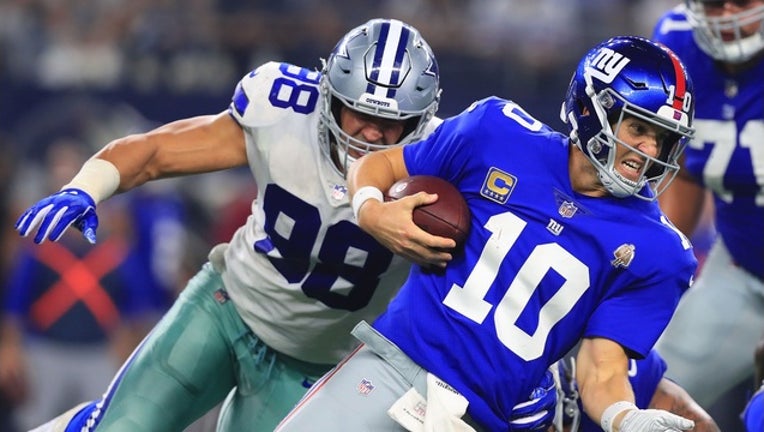 ARLINGTON, Texas (AP) - Dak Prescott was the first quarterback to get a good look at the Dallas defense this year - every day during training camp in California.

Eli Manning might now agree with his counterpart that this unit can lead the Cowboys in 2018.

The two-time Super Bowl winner from the New York Giants was sacked six times in a second straight strong performance from the Dallas defenders, and the Cowboys avoided their first 0-2 start in seven seasons under coach Jason Garrett with a 20-13 win on Sunday night.

"It wasn't always fun going against this defense in Oxnard," Prescott said after throwing a 64-yard touchdown pass to Tavon Austin to spark the Cowboys on the third play of the game. "They destroyed practices. They got after me in training camp and I knew they would get after the opposing quarterback. They definitely did."

The Cowboys are set to face a quarterback significantly more mobile than Manning - Russell Wilson in a visit to Seattle. And while Cam Newton gashed the Cowboys with some big running plays in Carolina's 16-8 win in the opener, Dallas was still in the game late because of its defense.

If the six sacks of Manning - two shy of the most in his career - are any indication, the Dallas defensive linemen will be coming in waves. Four of them had a sack apiece: DeMarcus Lawrence, Taco Charlton, Antwaun Woods and Tyrone Crawford. The others came from linebacker Damien Wilson and safety Kavon Frazier.

"I don't want to use the word 'dominant' just because I let you use that," owner and general manager Jerry Jones said. "The main thing is we've got depth and we've got speed and we've got rotation and we've got some skill back there in that secondary and in that linebacking spot relative to pass coverage."

Things to consider after the Cowboys had six players with at least one sack for the first time since 1997:

The Cowboys added some wrinkles after offensive coordinator Scott Linehan was criticized for bland play-calling against Carolina. After Austin beat the Giants deep right away, Dallas ran him on a reverse on a pitch from running back Ezekiel Elliott on the next drive. Austin picked up 15 yards on the way to a field goal.

Prescott had a career-high 45 yards rushing, mostly on fakes to Elliott and runs around end. And that was after Jones suggested on his radio show during the week that the Cowboys could showcase Prescott as a runner more - just as the Panthers do with Newton.

"Any time you compare a player to another player you're in trouble the minute it comes out of your mouth," Jones said. "You need to show you can do it before you can get the defenses to honor it."

New York's offensive line was already a work in progress before starting center Jon Halapio was carted off the field in the second half with his right leg in an air cast. Shaky right tackle Ereck Flowers was moved to that side after Nate Solder was signed as a free agent last spring to be the left tackle.

"All five guys working together, understanding calls, understanding what defenses are doing, and passing things off, so that one's probably always going to take the longest for them to start to gel," Manning said. "That group, they're going to be determined to play at a higher level, just like everybody else."

Dallas linebacker Jaylon Smith had a jarring hit of Manning on a 1-yard scramble and chased No. 2 overall pick Saquon Barkley out of bounds for a 3-yard loss. The rookie running back had just 28 yards rushing as the Cowboys held the Giants to 35 as a team a week after giving up 147 on the ground to the Panthers.

"They blitzed. They ran stunts. They rushed four," Solder said. "They did a number of things and we didn't pick up any of it."

There were only six two-loss teams in the NFL after Sunday's games (before 0-1 teams Seattle and Chicago play Monday night). When the Giants return to Texas next Sunday to play the Houston Texans, it will be a matchup of two of those 0-2 teams. "We've just got to get back to work and get ready to play Houston. There's no other way out of this," new coach Pat Shurmur said.