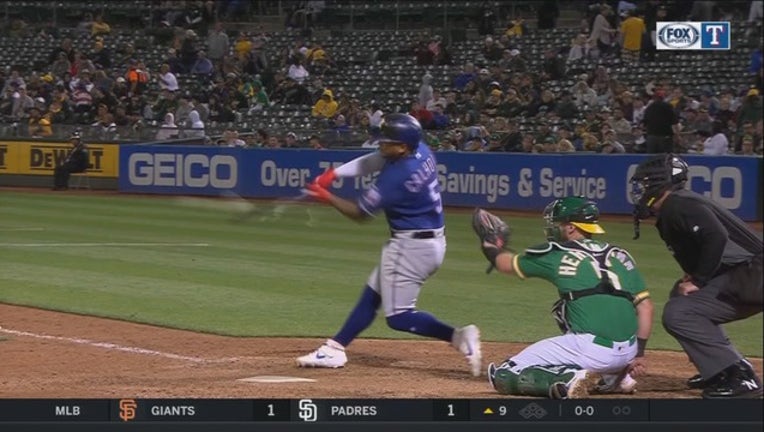 Lynn struck out eight in six innings and Willie Calhoun homered in his return to the majors, helping the Texas Rangers beat the Oakland Athletics 5-2 on Friday night.

Lynn (13-6) allowed two runs, one earned, and four hits in his first win since July 11. Asdrubal Cabrera had three hits and drove in two runs, and Calhoun finished with two hits and two RBIs.

Lynn threw a 95-mph fastball by Khris Davis on his 111th and final pitch. Then he spun around and unloaded.

"In all honesty it was a battle all night with them, so it was one of those things where it just kind of came out," Lynn said. "I got through six and gave the team a chance to win. Nothing else, really.

"My night's over, that was a tough one, that's what it felt like, so that was pretty much it."

The Rangers won for the third time in four games after losing eight straight.

The A's dropped their third in a row and fell a half-game back of Tampa Bay for the second AL wild card. Marcus Semien had two hits and scored twice.

Lynn worked around consecutive errors to start the game by Danny Santana, who was playing in place of Elvis Andrus after the veteran shortstop flew to Dallas following Thursday's game to be sworn in as a United States citizen.

After Matt Olson drew an 11-pitch walk that loaded the bases with no outs, Oakland scored just once on Ramón Laureano's sacrifice fly.

"Lance picked him up, and I think that's a testament to our team," Rangers manager Chris Woodward said. "We talk about that all the time, not everybody's going to have a great game, but we've got to pick each other up.

"Obviously Danny's done so much for us all year. That's a tough spot to be in, he hasn't played shortstop all year."

Mark Canha added an RBI single in the third before Texas rallied.

Cabrera singled in Mazara in the sixth, and Calhoun added a solo drive in the eighth. Calhoun was promoted from Triple-A Nashville on Thursday after All-Star slugger Joey Gallo had right wrist surgery.

Oakland got the tying run to the plate when Canha doubled and Laureano walked to start the ninth, but Martin struck out Khris Davis and Robbie Grossman and got Chris Hermann to ground out to third.

Davis was 0 for 4 with four strikeouts.

"We just aren't playing very well right now," manager Bob Melvin said. "We're not getting as many hits as we did before. You go through some ruts offensively. You have to do everything right, and we aren't."

"This thing is a lot more nerve-wracking than playing baseball," he said. "I never felt like this."

Andrus was 15 when he first came to the United States.

"A lot of memories came back," Andrus said. "The journey has been amazing and today is a day to always remember."

The A's have gone deep just once in their last five games after homering in 23 straight games, two short of a franchise record.

Rangers: RHP Edinson Vólquez (right elbow strain) will throw a bullpen Saturday and could start facing live hitters soon, Woodward said. Vólquez will pitch out of the bullpen when he returns, Woodward said.

Rangers: RHP Adrian Sampson (6-7, 5.19 ERA) will take his second turn in the rotation since starting the second half in the bullpen. Sampson is 0-3 with a 9.84 ERA in his last six outings (three starts).

Athletics: RHP Homer Bailey (8-7, 5.42 ERA) looks to rebound from a disastrous outing in which he gave up nine earned runs in two innings Monday in Houston. He'll make his third start since coming over in a trade with Kansas City.