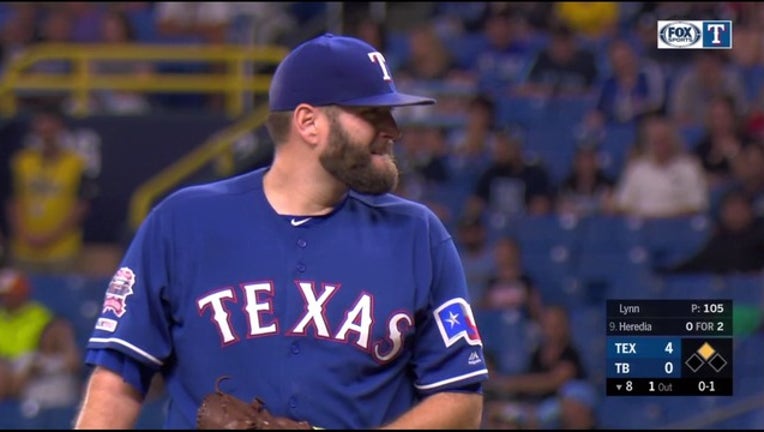 Lance Lynn struck out 10 over eight innings of three-hit ball, and the Rangers beat the Tampa Bay Rays 5-0 Friday night for their season-best sixth-consecutive win.

Lynn (10-4) allowed just one runner to reach third base. The right-hander held Tampa Bay without a hit from two outs in the second until Willy Adames opened the eighth with a double.

"Got some quick outs, got some strikeouts, got some great plays behind me and we were able to score some runs early so I was able to attack," Lynn said.

Jose Leclerc completed a three-hitter for the Rangers, who moved into a tie for the first AL wild card with the Rays at 46-36.

"I don't think anybody in our clubhouse is surprised," Texas manager Chris Woodward said. "We know we've got starting pitching and a bullpen that can execute pitches. We got on one of the best offenses, if not the best offense, in baseball. So we feel like we can match up with anybody."

Tampa Bay was coming off a 3-7 road trip.

"We got outplayed, outpitched and they came up with some timely hits," Rays manager Kevin Cash said. "We're a team right now that recognizes that things are not coming easy for us."

Texas took a 3-0 lead in the second on an RBI double by Rougned Odor and Ronald Guzman's two-run double off Yonny Chirinos (7-4).

The third inning included a couple bizarre baserunning plays - one runner was thrown out on a walk, and another scored on an errant pickoff attempt following an infield hit.

Elvis Andrus was on first when Nomar Mazara drew a base on balls. Andrus safely reached second but took off for third when catcher Mike Zunino made an off-target throw to shortstop Adames, who started a rundown that resulted in an out.

Mazara advanced to second on Joey Gallo's infield single. The ball was returned to Chirinos, who then made a bad throw to second as center fielder Guillermo Heredia sneaked in behind Mazara, who scored to make it 4-0.

"I saw him coming in, and I wasn't surprised that he was coming in," Chirinos said through a translator. "But I just made a bad throw."

Woodward said the two plays had him "looking around for a full moon."

"Then I realized we were indoors because I didn't know what was going on," Woodward added. "If you had your head down, you'd go, 'What just happened?'"

Odor left in the ninth after what Woodward said was possibly a left hamstring cramp that happened on a single.

Rangers: AL All-Star DH Hunter Pence (strained right groin) was encouraged after running the bases and could be back next week. ... LHP Jeffrey Springs (left biceps tendinitis) has been shutdown. "It didn't seem to get better with treatment, so that's when the doctors said 'OK, there's something going on in there,'" Woodward said.

Rangers 3B Asdrúbal Cabrera went 0 for 3 with a walk in his return after serving a three-game suspension for hitting an umpire with equipment. Cabrera is hitless in his last 19 at-bats.

Odor was thrown out at the plate trying for an inside-the-park homer after his sixth-inning hit got past a diving left fielder Tommy Pham. After Pham ran down the ball, he threw it to third baseman Joey Wendle, who made an accurate throw home.

Rays two-way prospect Brendan McKay will make his major league debut Saturday against Rangers RHP Adrian Sampson (6-4). McKay was 3-0 with a 1.08 ERA in five games with Triple-A Durham, where he also got at-bats as the DH.