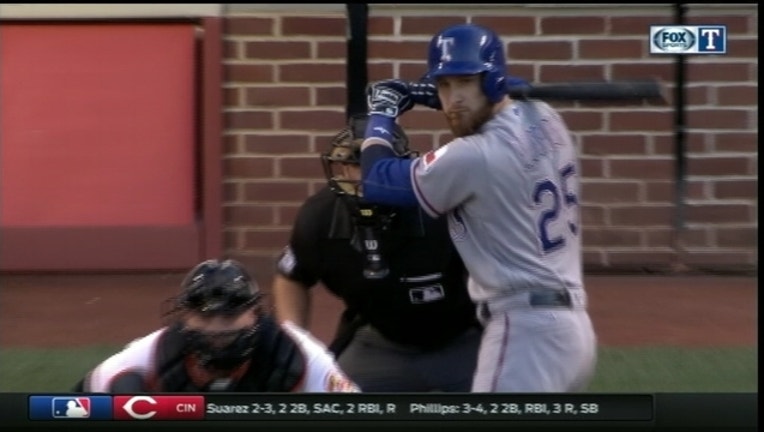 The All-Star catcher drove in five runs with two homers to help the Texas Rangers beat the Detroit Tigers 8-5 on Friday night.

Acquired from Milwaukee at the Aug. 1 trade deadline, Lucroy has six homers and 11 RBIs in 11 games with Texas.

"For him to come in and make an immediate impact not only defensively, but offensively, is pretty special," Rangers manager Jeff Banister said.

Darvish struck out five and allowed five hits and two earned runs in 6 2/3 innings. He is 6-0 against the Tigers in his career.

The Rangers increased their AL West lead to 7 1/2 games. Detroit dropped 1 1/2 games back in the race for the league's second wild card.

Lucroy hit a three-run homer in the first inning and a two-run shot, his career-high 19th of the season, in the third. Both came against Anibal Sanchez (6-12).

"This lineup is unbelievable," Lucroy said. "Anyone can beat you on a given day."

"Sanchez just didn't have it tonight. They jumped on him early," Tigers manager Brad Ausmus said. "(Lucroy) got a couple of pitches to hit and he handled them very well."

Sam Dyson pitched a scoreless ninth for his 26th save in 29 opportunities.

James McCann drove in three runs against Darvish with a second-inning double and a two-run homer in the seventh.

Tyler Collins also hit a two-run homer in the seventh on the first pitch from Tony Barnette. He had not allowed a run in 17 1/3 innings.

"We did a nice job of coming back," Ausmus said, "but it was just too much to overcome."

"I went out and checked with (Darvish) to see where he was at," Banister said. "He wanted Kinsler, so we gave him Kinsler. It looked like a catchable ball. We just got turned around and didn't get a glove on it."

Adrian Beltre singled home Texas' first run in the first inning. With two outs, Lucroy hit his first homer over the left-center field bullpen for a 4-0 lead. His second homer, also with two outs, went well up into the left-field seats.

Beltran led off the fifth with a homer down the right-field line. It was his 24th of the season, and second in 10 games with the Rangers since a trade from the Yankees.

Beltre's first-inning RBI was the 1,540th of his career. That put him in a tie for 45th place in major league history with Hall of Famers Harry Heilmann and Willie Stargell.

Darvish was 0-3 in his first five starts after returning from the disabled list July 16, but he had pitched well. Since his return, he has a 2.72 ERA and 48 strikeouts with seven walks over 36 1/3 innings in five quality starts.

With 3B Nick Castellanos and SS Jose Iglesias on the disabled list, the Tigers recalled SS Dixon Machado from Triple-A Toledo after the game. To make room on the roster, Detroit optioned RHP Warwick Saupold to Toledo. Saupold pitched three scoreless innings on Friday.

Tigers: Iglesias strained his left hamstring Wednesday at Seattle and was placed on the 15-day disabled list Friday. ... RHP Jordan Zimmermann (right neck strain) was cleared to play catch. ... RHP Mike Pelfrey was back in Detroit, undergoing treatment for back spasms. ... RHP Shane Greene (oblique strain) was available to pitch after throwing 12-15 pitches on Friday, according to Ausmus. Greene had not pitched since Saturday.

Tigers: LHP Matt Boyd (3-2, 4.69 ERA) is scheduled to start the second game of the three-game series.