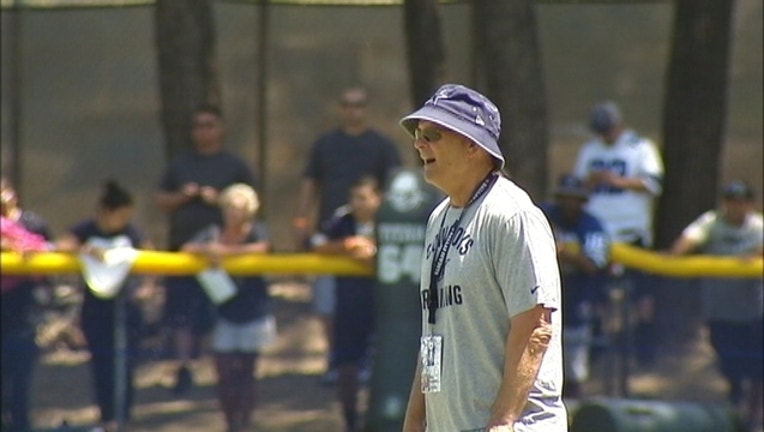 FRISCO, Texas (AP) - Dallas cornerback Nolan Carroll faces a two-game suspension over his arrest on a drunken driving charge this week, and defensive end David Irving awaits final word from the NFL on a possible four-game ban for violating the policy against performance-enhancing drugs.

Add the likely season-long absence of pass rusher Randy Gregory for multiple substance-abuse violations, and the Cowboys could be opening their second straight season with three potential defensive starters suspended.

Tight end Jason Witten, the leading voice in the locker room as he prepares for his 15th season, isn't trying to deny a disturbing trend. The 10-time Pro Bowler just says there's a delicate balance for teammates.

"I would never minimize the mistakes that were made," Witten said Wednesday after offseason practice. "But mistakes happen. And our job is to create an atmosphere where there is a togetherness. One thing about having been in a locker room, you can never point that finger."

Carroll, an eighth-year veteran who signed with Dallas in March following three seasons with NFC East rival Philadelphia, participated in practice but didn't appear in the locker room when it was open to reporters two days after his arrest in Dallas.

Irving was a locker room no-show for reporters for the second straight week since news of a failed drug test, which the third-year player is appealing. Irving showed promise last year for a pass rush lacking punch in recent seasons.

"We don't get frustrated, we just try to address the issue," coach Jason Garrett said . "We addressed the issue here like we have with other situations that have come up with our team. You address them head on, you do your best to solve the issue and learn from it and move forward."

Defensive end DeMarcus Lawrence was one of the three suspended starters going into last season. He violated the substance-abuse policy along with Gregory and linebacker Rolando McClain, who eventually was banned indefinitely for substance-abuse violations.

Lawrence, who missed the first four games, also had to deal with back issues that limited him to one sack in nine games after leading the Cowboys with eight sacks in 2015.

Former Dallas defensive lineman Jay Ratliff pleaded guilty to drunken driving over a crash that happened less than two months after Brown's death. Ratliff was at odds with the Cowboys over the handling of a sports hernia at the time and didn't play for them again, eventually ending up in Chicago after his release.

The Cowboys are standing by Carroll, who signed a $10 million, three-year contract with a $3 million signing bonus.

"Nolan has taken responsibility for it," Garrett said. "He's been accountable to it not only with me and the coaching staff but with the team. We all can learn from the situation and move forward."

Defensive coordinator Rod Marinelli has been without several top players because of injuries or suspensions while the defense struggled to make game-changing plays the past three seasons. But he's never spent much time dwelling on the absences.

"I think the message has been sent when they're not playing," Marinelli said. "So they miss a lot of football practice, which really affects your career."

The effect on the Dallas defense this year remains to be seen, again.