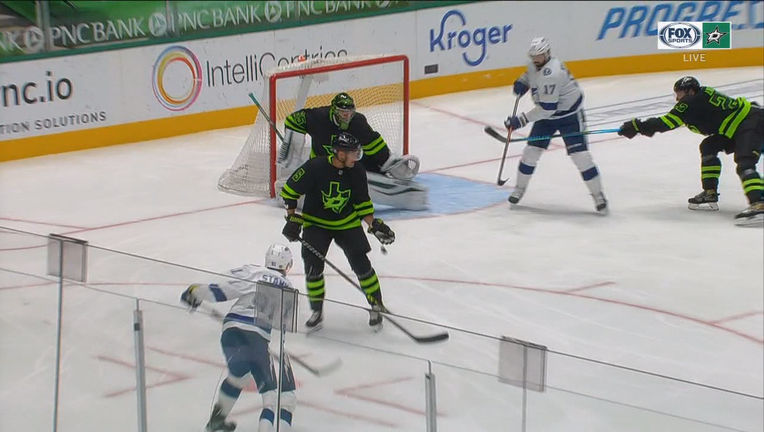 DALLAS - Steven Stamkos and Yanni Gourde scored in the second period and Andrei Vasilevskiy recorded his franchise-record 12th straight win as the Tampa Bay Lightning beat the Dallas Stars 2-1 on Tuesday night and extended their dominance in the season series between last year’s Stanley Cup finalists.

Vasilevskiy made 16 saves as the NHL-leading Lightning won their fifth straight overall and improved to 4-0-0 this season against the Stars. Tampa Bay beat Dallas in six games in the fall.

Roope Hintz scored his ninth goal and Anton Khudobin stopped 24 shots for Dallas, which has lost four of its last five games (1-2-2).

The Lightning have opened a five-point lead in the Central Division over Carolina, the Hurricanes with one game in hand.

The Stars are in seventh place in the division, trailing fourth-place Chicago for the division’s last playoff berth by seven points while having four games in hand.

Vasilevskiy is two shy of tying the NHL record for most consecutive goalie wins, most recently set by Sergei Bobrovsky in 2016-17.

"I just didn’t think about it," Vasilevskiy said of the streak. "I just tried to do my job."

Lightning coach Jon Cooper noted the streak is no fluke for a goalie with four career double-digit winning streaks. Vasilevskiy went into play leading the NHL in wins (now 21) and save percentage, and was second in goals against average.

"He’s a cornerstone goaltender," Cooper said. "He just continues to amaze. And I’m glad he didn’t have to stand on his head tonight for this one."

Vasilevskiy called it an easy game given he faced his second fewest shots of the season, but there conversely was a challenge in facing only seven shots through two periods, only one in the second.

Stars coach Rick Bowness said of that second period, "The worst thing you can do is sit back, and we sat back. We addressed after the period, tried to fix it during the period, but we couldn’t get anything going. Then when we did have some opportunities, we either fanned on the shot or took too long to release the puck."

Stamkos’ one-timer from the left circle deflected off the stick of Stars defenseman Andrej Sekera and tied the score at 8:16 of the second period on the power play for his team-best 16th goal of the season. About four minutes later, Gourde scored unassisted on the rush following his own rebound, giving him goals in four straight games.

Hintz took a pass from Jason Robertson on the goal line, skated across the crease and slipped a backhander in on Vasilevskiy’s glove side for a power-play goal at 3:33 of the first period. That gave the Stars their first lead on the Lightning this season.

Hintz has been in and out of the lineup for a month with a nagging lower body injury. He has five goals and three assists in his past six games for nine total goals, second on the team.

The Lightning killed overlapping penalties late in the third period that included 1:29 of 5-on-3.

"We didn’t create anything," Bowness said. "You get that much of an opportunity to tie the game, you’ve got your best players on the ice. I didn’t like anything about that 5-on-3."

Lightning defenseman Mikhail Sergachev returned to play after missing the first half of the second period after taking a puck to the face on an errant clearing pass by Vasilevskiy. Teammate Erik Cernak likewise made it back after going down with a knee injury after blocking a shot. Hintz was back on the ice following an awkward fall just outside the Tampa Bay crease.

"It’s impressive," Cooper said. "That’s why there’s that perception, that persona hockey players have as being tough."

The Lightning are 18-0-0 when leading after two periods, and Vasilevskiy is 9-0-3 vs. Dallas in regular-season play. … Robertson recorded his 14th assist and went into play tied for second in rookie assists. … McDonagh missed his first game of the season. Cooper said he hopes McDonagh will return during the three-game trip that will end Sunday.

The Lightning and Stars wrap up a two-game set on Thursday.