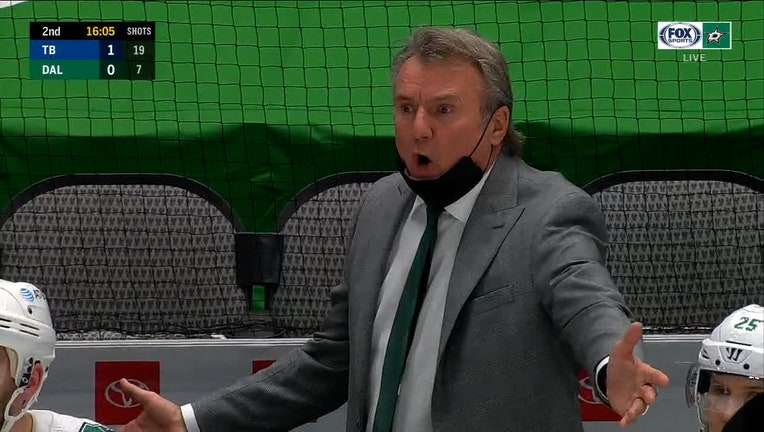 DALLAS - Braydon Point had a goal, an assist and the shootout winner, helping the Tampa Bay Lightning recover from a late meltdown to beat the Dallas Stars 4-3 Tuesday night for their third win in three tries this season in rematches of last year's Stanley Cup Final.

Andrei Vasilevskiy stopped 24 shots in his ninth straight victory, Mathieu Joseph and Steven Stamkos scored in regulation and Ross Colton also scored in the shootout for Tampa Bay, which vaulted from third place to first in the Central Division.

Vasilevskiy shut out the Stars in his three previous outings against them, beginning with the clinching game of last season’s Final. He closed out this win by stopping Alexander Radulov in the third round of the shootout.

Miro Heiskanen and Jamie Benn each had a goal and an assist, Radulov also scored in regulation and rookie Jake Oettinger stopped 33 shots for the Stars, who are 1-1-2 in their last four games. Benn and Radulov each scored in the final three minutes with an extra skater on as Dallas forced overtime.

Point took an outlet pass from Andrej Palat, sneaked behind Dallas’ top defensive pair and scored his 11th goal of the season at 3:55 of the first period on a backhand that trickled between the pads of Oettinger, who made a third straight NHL start for the first time.

Dallas ended its drought against the 2018-19 Vezina Trophy winner when Heiskanen, beside the crease, buried a rebound on a power play at 9:05 of the second period for his third goal of the season.

Tampa Bay regained the lead at 14:20 of the second when Pat Maroon won a puck battle in the trapezoid and fed Joseph in the slot for a one-timer, his seventh of the year.

Stamkos’ power-play slap shot from the left circle at 11:49 of the third period, his team-leading 14th goal of the season, gave the Lightning a two-goal cushion.

Lightning: Begin a three-game homestand on Thursday against Chicago.

Stars: Open a two-game series at Detroit on Thursday.