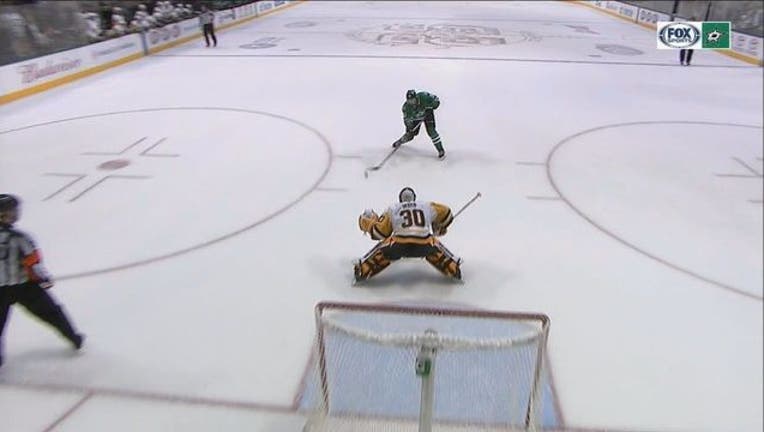 DALLAS (AP) - Tyler Seguin scored the deciding shootout goal and Kari Lehtonen stopped all three Pittsburgh shooters in the tiebreaker in the Dallas Stars' 4-3 victory over the Penguins on Friday night.

Evgeni Malkin, Sidney Crosby and Phil Kessel, with 71 goals among them this season, failed to score against Lehtonen. He won his fifth straight game, and stretched Dallas' winning streak to five games.

Shooting second, Seguin sent a shot off of Matthew Murray's right side and into the net.

The Penguins tied it with 1:13 left in regulation on defenseman Justin Schultz's goal from above the left faceoff circle.

Pittsburgh took a 2-0 lead in the first period on goals by Riley Sheahan and Carl Hagelin.

The Stars' comeback began when Seguin scored his sixth goal in five games at 17:57 of the first period. John Klingberg and Dan Hamhuis scored early in the third period to give Dallas a 3-2 lead.

Lehtonen finished with a season-high 34 saves.

Murray made 33 saves, including stops on breakaways by Jamie Benn and Alexander Radulov in overtime.

Benn assisted on all three goals in regulation for Dallas.

Sheahan scored at 9:07 of the first period. He beat Dallas' Jason Spezza to a loose puck, skated unmolested down the left side and slid a backhand between Lehtonen's legs.

Dallas had a 4-on-3 power play when Hagelin took the puck for a breakaway. Klingberg tried to reach out to slow Hagelin with his stick, but the Penguin beat Lehtonen anyway for Hagelin's fourth career short-handed goal and a 2-0 lead at 10:54.

Neither team scored or had a penalty in the second period.

Crosby missed a spectacular goal when he took the puck off the back boards and put it between his legs and behind him. Crosby flipped the puck over the crossbar.

On the tying goal, Radulov passed from behind the net to Klingberg at the top of the right faceoff circle, and he sent a wrist shot past Murray.

NOTES: Aston-Reese assisted on Sheahan's goal for his first point in his third NHL game. ... Stars rookie D Dillon Heatherington also had first NHL point in his fifth game, assisting on Seguin's goal. ... Penguins D Jamie Oleksiak played against his former team for the first time since Dallas traded him in December. ... Stars C Martin Hanzal missed his 21st game this season after being hit in the left leg by a teammate's shot during Thursday's game at Chicago. ... LW Conor Sheary returned to Pittsburgh's lineup after missing three games.