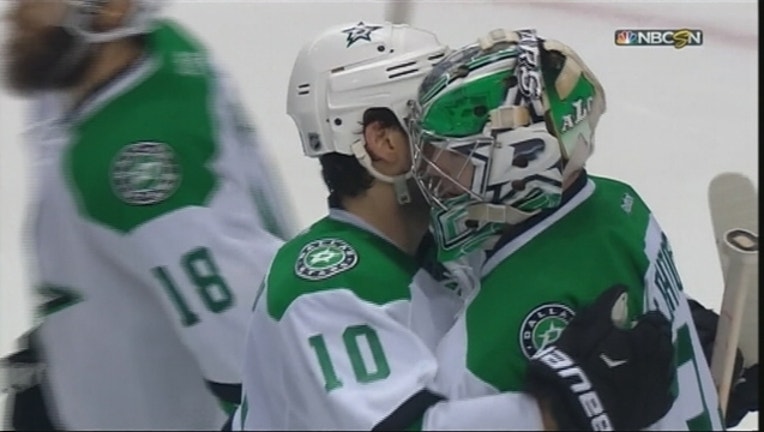 ST. LOUIS (AP) — Rookie Mattias Janmark ignited a three-goal first period and Kari Lehtonen made 35 saves for the Dallas Stars, who forced Game 7 with a 3-2 victory over the St. Louis Blues on Monday night.

Vernon Fiddler and Jason Spezza also scored for Dallas, which reclaimed home ice for the deciding game on Wednesday night despite getting outshot 37-14 with the Blues dominating the last two periods.

Home ice has meant little, given the road team has won three in a row and four of six in the series.

Blues goalie Brian Elliott, who had played well throughout the postseason, was replaced with the Stars leading 3-0 on just seven shots at 16:49 of the first.

Jake Allen finished in his first appearance of this postseason, facing just seven more shots in the final two-plus periods.

St. Louis will be seeking its first trip to the Western Conference final since 2001 and Dallas, which finished first overall in the West, previously made it that far in 2008.

The Stars were ahead 3-0 after the first, their first two- and three-goal leads of the series. That early show of strength muzzled another standing room crowd of 19,808 at the Scottrade Center with the first two goals coming in a span of 20 seconds.

Janmark blocked Colton Parayko's dump-in from just inside the blue line and skated in alone on Elliott, scoring on a high shot. Fiddler made it 2-0 on a deflection at 5:13 not long after Elliott couldn't clear the puck.

Elliott was pulled after the Stars made it three goals on seven shots, with Spezza scoring on a power play from the slot at 16:49. Blues defenseman Jay Bouwmeester fell down seconds before Spezza's first of the series and fifth of the playoffs.

The Blues had several good chances in the first, but often missed the net.

Steen's goal on a rebound of Robert Bortuzzo's shot gave the Blues life in the second period. The Blues had a 14-5 shots advantage in the period, including another good opportunity for Steen on a one-timer off Lehtonen's pads in the final minute.

Berglund cut the deficit to one at 8:59 of the third, tapping it in from close range off a nice setup from Jori Lehtera. Lehtonen stopped Jaden Schwartz on a one-timer with about 20 seconds left.

NOTES: Spezza has a point in four consecutive games. Janmark had been scoreless three straight games. Fiddler scored his first of the playoffs. ... F Patrick Eaves returned for the Stars from a leg injury, and hit the crossbar with about two minutes left with a chance to extend the lead to two. ... Bortuzzo played his fourth game of the playoffs for St. Louis in place of rookie Joel Edmundson on defense.