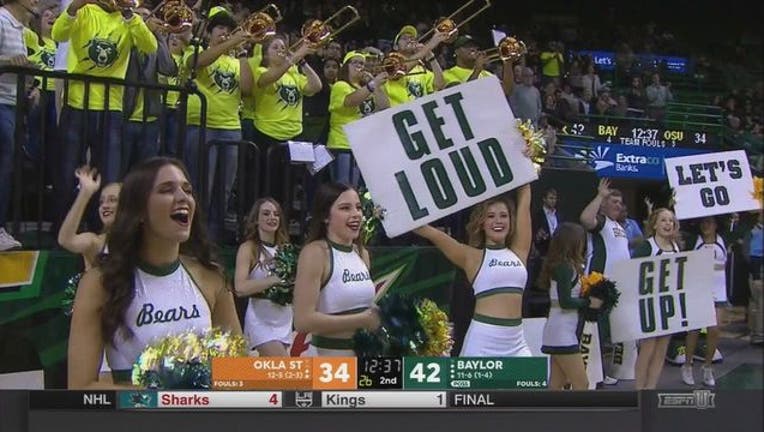 WACO, Texas (AP) -- Manu Lecomte scored 25 of his career-high 30 points after halftime as Baylor avoided a rare three-game losing streak with a 76-60 victory over Oklahoma State on Monday night.

After blowing a 10-point lead and trailing at halftime, the Bears (12-6, 2-4 Big 12) went ahead to stay when Lecomte hit a 3-pointer on their first shot of the second half.

Lecomte finished 11-of-17 shooting, including 7-of-12 3-pointers to match his career high for made 3s.

Jo Lual-Acuil Jr. had 12 points for Baylor, while Mark Vital had 10 rebounds and eight assists.

The Bears made three consecutive 3s in a 77-second span, with Jake Lindsey's long-range shot sandwiched by a pair from Lecomte, to go ahead 42-34 with 12 minutes left.

Jeffrey Carroll, playing his 100th career game with the Cowboys, finished with eight points on 2-of-12 shooting. He had averaged 19 points over his previous eight games.

Oklahoma St.: The Cowboys couldn't pull off another late big comeback. They were coming off a 65-64 win at Texas, where they overcame a 12-point deficit in the final 5:55. Oklahoma State did have that first-half comeback at Baylor, but fell behind quickly after halftime and the margin grew to 20.

Baylor: The Bears still haven't had a halftime lead in a Big 12 game this season. Since that five-game losing streak in 2014, they have an overall record of 98-41.

Oklahoma State is home Saturday against No. 4 Oklahoma, closing out the regular-season series between the instate rivals. The Sooners won 109-89 in Norman on Jan. 3.

Baylor plays three of its next four games on the road, starting Saturday at No. 10 Kansas.