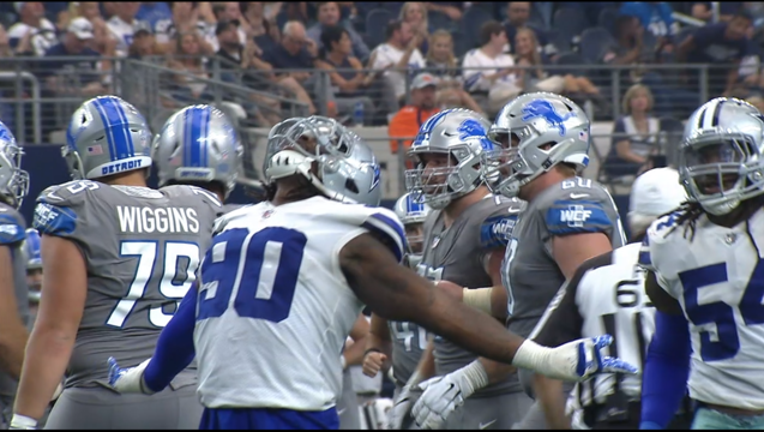 FRISCO, Texas (AP) - DeMarcus Lawrence may not reach his career high in sacks during the encore to the Dallas defensive end's breakthrough season in the NFL.

By any measure from his coaches and teammates, Lawrence's follow-up to 14 1/2 sacks has been a success . A big one.

"With the things that we've changed in the defense, he has to more disciplined in the run and things of that sort," defensive lineman Tyrone Crawford said. "Sacks are a good number for everybody else mainly. As far as a good player on a good defense, you're not going to find a better one."

Lawrence has 8 1/2 sacks through 12 games. The fifth-year pro had that many in five games last year. But Lawrence collected his first career interception on a screen pass two games ago against Washington before helping lead the defense's signature moment in 2018.

The Cowboys bottled up Drew Brees and the New Orleans Saints in a 13-10 win that set them up for sole possession of first place in the NFC East. Dallas took that spot with the Redskins' loss to Philadelphia.

Now Dallas (7-5) gets its rematch with the Eagles (6-6) on Sunday, with first place on the line just as it was on Thanksgiving against Washington. The Cowboys started their current four-game winning streak with a victory in Philadelphia.

"I have my ups and down this season. No complaining about it," Lawrence said. "I really embrace this season. It just shows how much we really care, how much I really care, just because of how we're standing as a defense. I feel like everything is looking up."

And that was before the Cowboys held the Saints to 176 yards, their lowest total in 22 years and more than 200 yards below their season average. While rookie Leighton Vander Esch and Jaylon Smith have taken a large share of the spotlight at linebacker, Lawrence's presence up front is significant.

Lawrence has played the most snaps among defensive linemen by more than 100. He's getting the blocking attention of someone who tied for second in the NFL in sacks a year ago. And he's still stopping the run, something defensive coordinator Rod Marinelli says Lawrence has always done well.

"I think he is absolutely playing dynamic in every phase of the game," Marinelli said. "He's from sideline to sideline to screens to picking a screen off, to doing things exactly right. He can do everything. And he leads this defense by his effort. He's relentless."

Crawford believes another look at film from last season would reveal more missed assignments by Lawrence than this season, another reason to pick other things over sacks as the measure of Lawrence's worth. Lawrence also embraced the intangibles coming off his first big year.

"The guy has worked harder than I've ever seen him work, especially throughout the offseason and into the season," Crawford said. "He's become more of a leader in the locker room. The guy's been balling. He's just got to keep it up."

Lawrence's first season with double-digit sacks led to his first Pro Bowl and a franchise tag worth $17.1 million . The 26-year-old happily signed it, believing the security of a long-term contact would follow another solid season.

The sides never got close on that deal last offseason, and the question of another year on the franchise tag will hover until they get close, if they do. Lawrence has never let himself get bothered by that question.

The Cowboys are measuring in other ways.