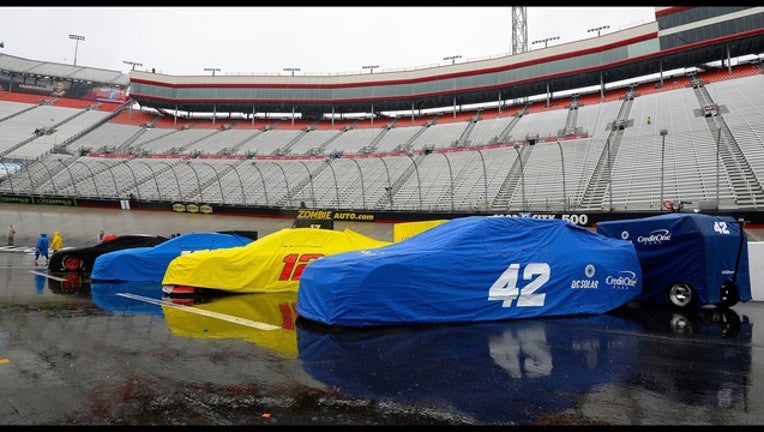 Cars sit on pit lane in the rain prior to the start of the Monster Energy NASCAR Cup Series Food City 500 at Bristol Motor Speedway on April 15, 2018 in Bristol, Tennessee. (Photo by Robert Laberge/Getty Images)

BRISTOL, Tenn. (AP) - Kyle Larson will have to wait another day to try to capture his first NASCAR Cup Series victory of the season.

The race at Bristol Motor Speedway was postponed until Monday because of heavy rain with Larson out in front. Racing was halted three times Sunday due to wet weather.

Action is scheduled to resume Monday at 1 p.m.

Larson led 74 laps when the race was halted on lap 204, just 46 laps from it becoming official. NASCAR hopes to complete all remaining 296 laps, although the forecast calls for more rain and possibly snow.

Larson seemed to have found his groove on the track before the third and final red flag came out. NASCAR waited about an hour before officially postponing the race with a forecast of steady rain for the remainder of Sunday night.

"It's hard to get a rhythm with all the rain and stuff and then getting out of your car and getting back in," Larson said.

Larson liked the speed of his car, but said the track was slick.

"There is only a little line there on the bottom that has got some grip," said Larson, who normally likes to run on the high side of the Bristol track. "If you get out of it, it's slick. If you get below it, it's slick. So, it's been fun, but it's kind of hard to guess where you need to position your car there for a little while."

Some drivers won't have to worry about coming back Monday.

Ryan Blaney was dominant early in the No. 12 Ford, leading 99 laps of the first 119 laps before getting caught up in wreck that left his car in shambles.

It happened on turn three when Chris Buescher and Trevor Bayne, who were fighting to stay on the lead lap, got tangled up in front of Blaney, leaving him nowhere to maneuver.

His car was taken behind the wall, ending his day.

"By the time I got away from the car right in front of me they were already turned right up the race track and I was already going to the top," of the track," Blaney said. "I kind of saw them spinning low and I thought that top was going to be OK and then they slid back up and got us. That stinks. I thought we had a good car and nothing to show for it."

Michael McDowell, Chris Buescher, Harrison Rhodes and Ross Chastain also are out of the race.