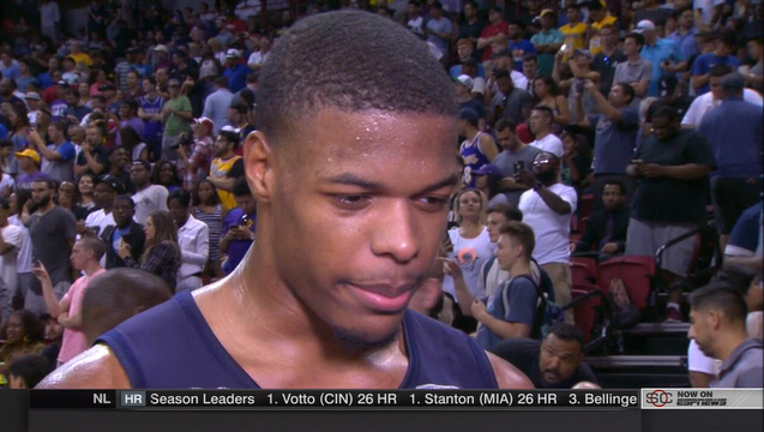 LAS VEGAS (AP) - Lonzo Ball's bid for a third straight triple-double was short-circuited by a calf injury. The lead he helped the Los Angeles Lakers build while he was in the game proved to be just enough to top Dennis Smith Jr. and the Dallas Mavericks.

Ball had 16 points and 10 assists in 21 minutes before leaving with a strained right calf, and the Lakers held on for a 108-98 victory in the Las Vegas Summer League semifinals on Sunday night.

Kyle Kuzma scored 24 points, Matt Thomas had 20 and Vander Blue added 17 to help the Lakers reach the championship game. They will face the Portland Trail Blazers, who beat Memphis 87-82 in the other semifinal, on Monday night.

Smith scored 21 points on 7-for-13 shooting for the Mavericks, who trailed by as many as 26 points in the second half before mounting a huge comeback in the fourth quarter. Yogi Ferrell added 15 points and Dorian Finney-Smith and Brandon Ashley each had 13.

Wearing Jordans on his feet instead of the family's Big Baller Brand ZO2s, Ball made 5 of 7 shots and had a beautiful punch-ahead pass to Alex Caruso for a dunk that had thousands of Lakers fans out of their seats in the first half. He also had four rebounds, putting him well on his way to this third triple-double of summer league play before his right calf tightened up.

Ball tried to jog it off in a back hallway in the third quarter, but he was hobbling a little bit and was shut down for the remainder of the game. Lakers summer league coach Jud Buechler said it was too soon to tell if Ball would be available for the championship game.

"His health comes first," Buechler told reporters after the game. "We'll see how he feels in the morning."

The injury took a little of the edge away from an anticipated matchup of two rookie point guards who have excelled in Vegas. Ball was drafted second overall and Dennis Smith was taken ninth. Both have been cast as the future faces of their respective franchises, and both have made strong first impressions in summer league play.

The two went right at each other from the jump, combining to hit their first seven field goals in a back-and-forth affair.

The Lakers led by as many as 26 points before the Mavericks mounted a comeback, trimming the deficit to two with 2 minutes to play. Smith went right to the rim, using a little Euro-step to draw a foul.

But Thomas, who went 6 of 7 from 3-point range, hit a 3 on the other end and the Lakers were able to hold off the charge.

In the other game on Sunday night:

Jarnell Stokes had 22 points and 15 rebounds to lead Portland over Memphis in the first semifinal on Sunday night.

Caleb Swanigan continued his strong summer league with 15 points and 11 rebounds for the Blazers, who trailed by 16 points in the first half before rallying to overtake the Grizzlies in the second half.

Stokes got his NBA start with the Grizzlies, playing 19 games for Memphis in 2014-15 after he was acquired in a draft-night trade with Utah. The Grizzlies traded Stokes to Miami the following season in the deal that brought Mario Chalmers to Memphis. He played two games with the Nuggets last season.

Wayne Selden led the Grizzlies with 13 points in 22 minutes.

Jorge Gutierrez added 16 points and eight assists, including a pair of nifty, behind-the-back passes for easy layups, for the Grizzlies.

This story's headline has been corrected to show that the Lakers reached the title game.