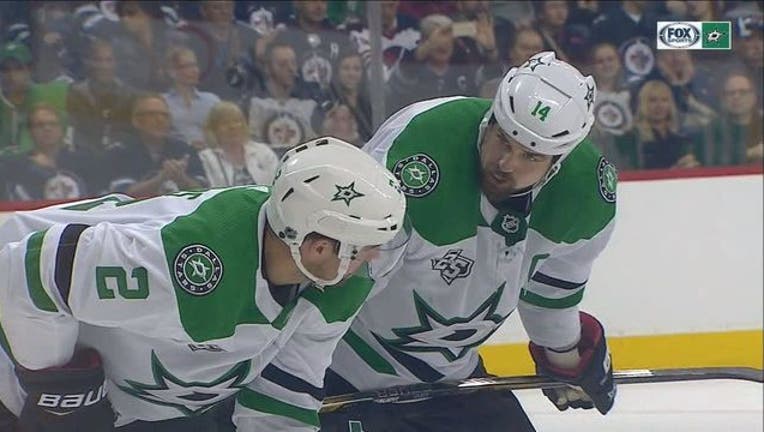 WINNIPEG, Manitoba (AP) - Patrik Laine scored twice to extend his point streak to 15 games and tie Alex Ovechkin for the NHL goal lead, and the Winnipeg Jets beat the Dallas Stars 4-2 on Sunday night to match the franchise wins record at 43.

The second-year sniper has 43 goals, matching the total from Ovechkin, the Washington star and Laine's boyhood favorite. Laine's point streak is the longest active run in the NHL and adds to his league record for the longest point streak by a teenager. The streak includes 18 goals and eight assists.

Mattias Janmark and Jamie Benn each scored for Dallas.

Connor Hellebuyck made 28 saves for the Jets in the second game of a six-game homestand. The last time they reached 43 wins was 2014-15, when they made the playoffs for the first time since relocating to Winnipeg from Atlanta.

The victory also gave Winnipeg a sweep over the Stars in the teams' four-game season series.

Ben Bishop stopped three shots before leaving the game with 9:49 remaining in the first period after whipping out his left glove to snag Bryan Little's shot. Playing his second game after missing five with a knee injury, Bishop stood in the crease bent over before skating off with what the team reported as a lower-body injury.

Kari Lehtonen replaced Bishop and made 17 saves for the visitors, who finished off a winless five-game road trip (0-3-2).

Winnipeg led 1-0 after the first period and 3-2 after the second.

With Benn in the penalty box for tripping, Laine scored with 0.4 seconds remaining in the first period following a supreme effort by Wheeler. After losing an edge and falling down near the bottom of the right circle, Wheeler swept a one-handed pass through the feet of Stars defenseman Dan Hamhuis to Laine out in front, and he put a high shot past Lehtonen.

It was Laine's 19th power-play goal, tops in the NHL. Wheeler picked up his 61st assist of the season, also a league high.

NOTES: Jets C Adam Lowry picked up an assist on Chiarot's goal in his first game back after sitting 19 with an upper-body injury. Mark Scheifele and Tobias Enstrom also returned from injury. Scheifele got a helper on Wheeler's goal.

Stars: At Capitals on Tuesday night.