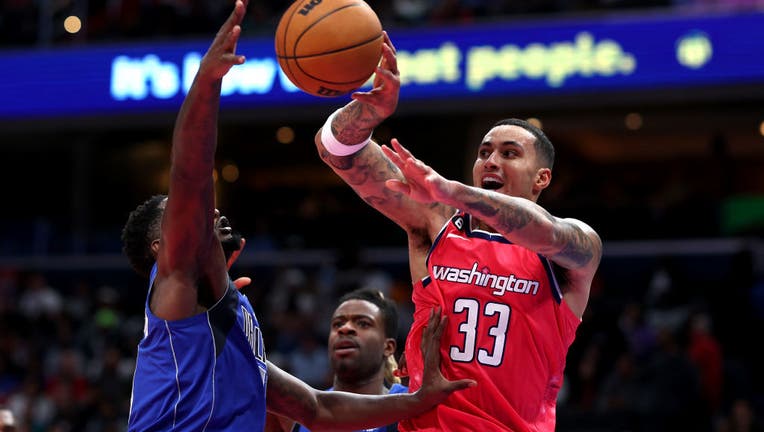 WASHINGTON, DC - NOVEMBER 10: Kyle Kuzma #33 of the Washington Wizards passes the ball in front of Dorian Finney-Smith #10 of the Dallas Mavericks in the second half at Capital One Arena on November 10, 2022 in Washington, DC. NOTE TO USER: User expr

WASHINGTON - Kyle Kuzma scored 36 points, and the Washington Wizards overcame the absence of Bradley Beal and Kristaps Porzingis to beat the Dallas Mavericks 113-105 on Thursday night.

Rui Hachimura added 23 points for Washington, which was missing Beal because of health and safety protocols and Porzingis because of a left groin strain. The Wizards fell behind 22-8 but quickly rallied and eventually pulled away thanks to a trio of 3-pointers by Kuzma early in the fourth.

"It's a character win, it's a gutsy win, however you want to characterize it," coach Wes Unseld Jr. said. "Never ideal to be down a few players, especially two guys that really do a lot for you offensively."

Spencer Dinwiddie, who went to Dallas in the trade that sent Porzingis to Washington, led the Mavericks with 33 points, and Luka Doncic contributed 22. The Mavericks have lost two in a row following a four-game winning streak.

"We haven't done our job the last two games," Dallas coach Jason Kidd said. "That's why you play 82 of them, and so we'll go back and look at this."

The Wizards (6-6) haven't started quite as impressively as last season, when they won 10 of their first 13 games, but Thursday's performance gave them back-to-back victories for only the second time this season. It was the start of a six-game homestand for Washington, the first four of which are against teams from the Western Conference.

Washington climbed out of its early deficit and trailed 61-58 at halftime. The Wizards then closed the third quarter strong and led 87-83 before Kuzma opened the fourth with a 3-pointer. He later made two more 3s to make it 98-86.

"I just got a good rhythm right from the jump," Kuzma said. "I just really just set my intentions on the night of just trying to be aggressive, trying to score first and then find my teammates second."

With Porzingis unavailable, Daniel Gafford made an impact with 11 points, 10 rebounds and four blocks.

Dinwiddie said he didn't appreciate some of the narratives that accompanied his exit from the Wizards.

"They tried to frame it as if I was saying I should be the man or something, which is blatantly false, because we had Bradley Beal," he said. "And even when I signed, it was to be Bradley Beal's co-pilot."

After scoring at least 30 points in each of the first nine games, Doncic has been held under that by both Orlando and the Wizards.

Wizards: Delon Wright (right hamstring strain) and Taj Gibson (cervical strain) did not play. ... The Wizards wore pink jerseys as part of their