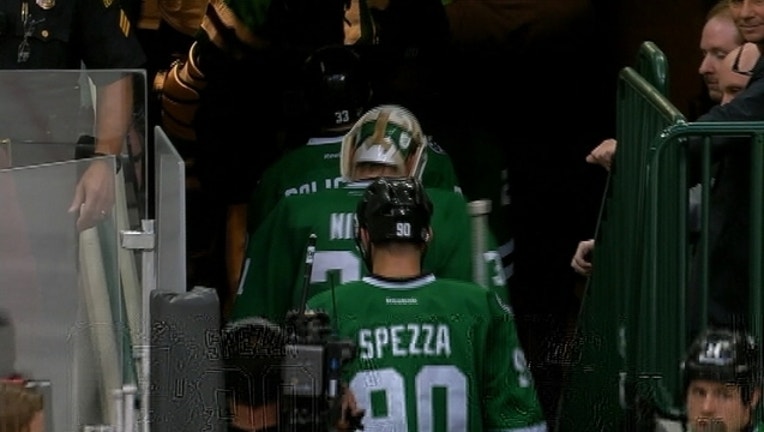 DALLAS (AP) — Mikko Koivu redirected Ryan Suter's shot from the left point 4:55 into overtime and the Minnesota Wild beat the Dallas Stars 5-4 on Friday night to stay alive in their first-round series.

Koivu scored the last two goals for the Wild, who go home still down 3-2 in the best-of-seven series. Game 6 is Sunday.

Jason Spezza and Alex Goligoski scored 28 seconds apart almost midway through the third period, giving the Stars their first lead of the game.

But the Wild forced overtime when Koivu went top shelf for the tying goal with 3:09 left in regulation. Koivu, the Wild's leading scorer in the regular season with 56 points, had only one goal without an assist in the series until then.

Dallas fell behind 2-0 in the first 5 1/2 minutes and didn't lead until Goligoski's goal with 11:04 left in regulation that hit the back of defenseman Marco Scandella on the way into the net and made it 4-3.

That came right after Spezza's third goal of the series. With a defender tugging along, Spezza sent a shot that slid in front of Devan Dubnyk and hit the far post before ricocheting past the line to tie it.

Antti Niemi stopped 19 of 24 shots in his second consecutive start in the series for Dallas after Kari Lehtonen was in goal for the first three games.

After a scoreless, sometimes lethargic second period, the third period started with Minnesota up 2-1. The teams then almost immediately traded goals in a span of 50 seconds.

Stars captain Jamie Benn tied it at 2 with some nifty stick work, guiding the puck around Dubnyk and into the net only a minute into the third period.

The Wild didn't stay down long, with Nino Niederreiter scoring to put them back up.

Like he has all season, Stars coach Lindy Ruff has gone with both goalies in the playoffs.

Lehtonen was in net when the Stars won the first two games at home, and for the 5-3 loss in Game 3 at Minnesota. Niemi then stopped 28 shots in their 3-2 win in Game 4, but gave up two goals in less than 5 1/2 minutes Friday night.

The Wild took advantage when Goligoski turned over the puck right in front of Niemi. Mikael Granlund initial's shot was stopped but the loose puck was to the left of the net, and Granlund poked it in with David Jones getting an assist after getting his stick in the fray.

Less than 2 minutes later, Jordon Schroeder, playing his first game in the series, scored on a pass from Ryan Suter.

Johnny Oduya scored his first goal for Dallas since Dec. 17 — a span of 55 games, including the playoffs — to get the Stars to 2-1 before the first intermission with his one-timer from above the left circle.

Notes: Dallas had 85 total shots in regulation, 40 more than Minnesota. ... Stars LW Antoine Roussell and Wild defenseman Matt Dumba got roughing minors, instead of potential 5-minute penalties, after they threw several punches during a scuffle 8 minutes into the game. ... While Minnesota's top goal scorer Zach Parise is still considered week to week with his upper-body injury, left wing Thomas Vanek is day to day with his upper-body injury.