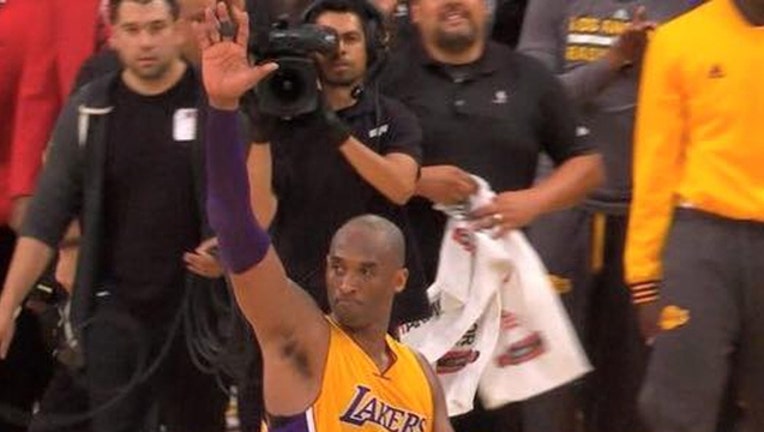 And with sweat and confetti all over his gold uniform for the final time, he expressed humble thanks to his fans and family for their loving support over two decades.

Now that's a Hollywood ending to a remarkable career.

Bryant utterly dominated his final game Wednesday night, wrapping up 20 NBA seasons with one last offensive showcase in the Lakers' 101-96 victory over the Utah Jazz.

He scored 23 points in the fourth quarter, posting his first 50-point game since February 2009 and rallying the Lakers from a 15-point deficit to win the final game of the worst season in franchise history.

It was messy, ridiculous and magical — even to the man who did it so many times over 20 years.

"It's hard to believe it happened this way," Bryant said. "I'm still shocked about it."

With the entire Staples Center crowd standing, Bryant made a 3-pointer with 59 seconds left. He hit another with 31 seconds to play, putting the Lakers ahead 97-96. He finished with an assist before checking out for good with 4.1 seconds left in just the Lakers' 17th win of the season.

"The perfect ending would have been a championship," Bryant said with a smile. "But tonight was (me) trying to go out, play hard and try to put on a show as much as I possibly could. It felt good to be able to do that one last time."

Bryant and his teammates conspired for one last omnivorous scoring performance by the third-leading scorer in NBA history. He played 42 minutes and took a career-high 50 shots, his teammates attempting to set him up for points on nearly every possession.

Kobe came up with the fifth highest-scoring game of his career. He became the oldest player to score 50 points in an NBA game with his highest-scoring performance since getting 61 against New York in 2009 — oh, and he had four assists and four rebounds.

The Lakers sprayed him with champagne in the locker room, although he didn't like it: "That's only for championships."

It was still one last classic from the Black Mamba.

"It just didn't surprise me, the way he would go out," said Lakers coach Byron Scott, Bryant's teammate in his rookie season. "Sixty points wasn't a surprise. I knew he had it in him."

The entire night was a tribute to Bryant, who is retiring after 20 seasons, five championship rings and 18 All-Star selections with the Lakers, who honored him before and after the game. Bryant is just the fifth player in NBA history to play 20 seasons, and the first with just one team.

"I think the most important part is that we all stayed together throughout," Bryant said to the crowd. "You'll always be in my heart, and I sincerely, sincerely appreciate it. Thank you from the bottom of my heart. I love you guys."

He also had a few laughs after finishing his 1,346th regular-season game with 33,643 career points.

"The thing that had me cracking up all night long is, I go through 20 years of everybody screaming to pass the ball," Bryant said with a grin. "And then the last night, they're like, 'Don't pass it!'"

It was daylong tribute with thousands of fans thronging the downtown streets around Staples Center and chanting his name from early afternoon. Fans lucky enough to get inside Staples Center greeted him with ovations at every opportunity. Magic Johnson anchored a brief pregame tribute by calling Bryant "the biggest and greatest celebrity we've had in this town for 20 years" and "the greatest to wear the purple and gold."

Bryant embraced his roles as a hero and villain throughout his career, and he mentioned the duality in describing his outlook on sports afterward. He had rocky times in Los Angeles, from his sexual assault charge in Colorado in 2003 to his feud with Shaquille O'Neal, who watched the finale at courtside.

It was all forgotten by the time Bryant took the Staples court for the final time.

After blowing kisses and pounding his heart before the game, Bryant got right to work on what the fans wanted to see. He didn't count on the nerves that caused him to miss his first five shots before he pump-faked and finally connected on a jumper.

Bryant found a rhythm then, finishing the first quarter with 15 points on 13 shots. He kept it up after sitting out the first six minutes of the second, finishing with 22 points despite missing a last-minute shot, his 20th of the first half.

The Lakers snapped a six-game skid in their final outing, but their demanding fans could forget about the awful season for one night.

Trey Lyles scored 18 points and Gordon Hayward had 17 for the Jazz, who were eliminated from playoff contention shortly before tipoff by Houston's win over the Sacramento Kings. The Jazz played defense, but Bryant's persistence wore them down.

"We weren't trying to let him go off on a win," said Joe Ingles, who guarded Bryant closely. "As it goes on, it will sink in more, and what he did was pretty impressive. He made some tough shots, too. I don't think we gave him any open looks. He was obviously pretty hyped up for the game. Forty-two minutes and 50 attempts will get you 60, apparently."

Lakers: Bryant surpassed his previous career high of 47 shots, taken in a loss to Boston on Nov. 7, 2002. ... Los Angeles has missed the playoffs in three straight seasons, the longest drought in franchise history. ... Bryant shot his 10,000th free throw to complete an early three-point play. ... Jordan Clarkson's 12 points were the second-most by the Lakers.

Lakers, Jazz: End of the season for both teams.