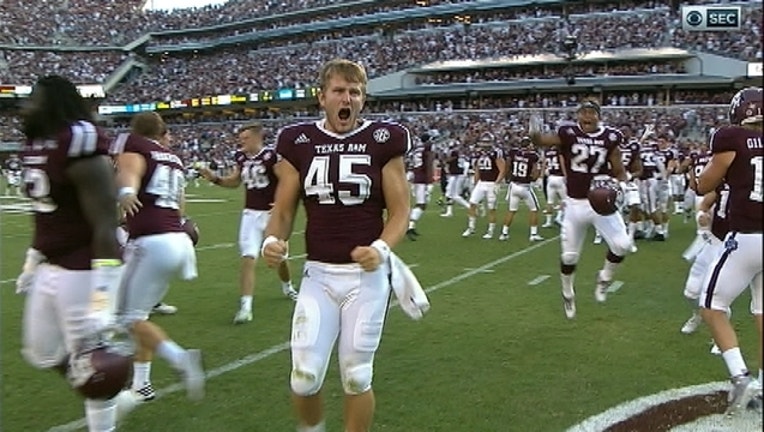 COLLEGE STATION, Texas (AP) — Trevor Knight threw for 239 yards and a touchdown and ran for two more scores, including one in overtime to lead Texas A&M to a 31-24 victory over No. 16 UCLA on Saturday in his debut with the Aggies.

The Aggies had a fourth-and-1 from the 1 in overtime when Knight waltzed into the end zone untouched for the score in the opener for both teams.

Texas A&M sealed the victory when Justin Evans knocked down Josh Rosen's pass at the goal line on fourth down.

Rosen threw three interceptions while working under heavy pressure from a defense led by Myles Garrett.

"We didn't have any chit chat. There was no trash talk," Garrett said. "I just knew I was going to be in his face a lot."

The Aggies looked to have this one wrapped up when they led by 15 in the fourth quarter after using two third-quarter touchdowns.

But UCLA's offense finally got going after that, scoring twice in two minutes with the second one coming on a 62-yard pass by Rosen to cut it two 2. A 2-point conversion after that TD tied it with 2:39 remaining.

The Bruins were driving again after a third straight punt by A&M when Evans intercepted Rosen's pass for the second time to give A&M a chance to win it in regulation.

"He knew that he made mistakes ... he's going to shoulder all of the blame, but he was responsible for bringing us back as well," coach Jim Mora said of Rosen. "We've got to train him better at protecting the football and making better decisions."

But Knight's pass was knocked down in the end zone to force overtime.

Knight wasn't the only former Sooner to shine for the Aggies on Saturday. Running back Keith Ford had a touchdown and 65 of A&M's 203 yards rushing in his first game since setting out a year following his transfer from Oklahoma.

UCLA: Rosen will have to make better decisions and the Bruins need to shore up an offensive line that allowed five sacks on Saturday to get back on track and win the Pac-12's South division as they were predicted to do.

TEXAS A&M: Coach Kevin Sumlin will certainly have plenty for Knight to work on after seeing him in game action for the first time with the Aggies. But his solid performance along with the excellent outing by the running game answered some questions about an offense that lost quarterbacks Kyle Allen and Kyler Murray to transfers and got a new offensive coordinator in Noel Mazzone this offseason.

UCLA: The Bruins meet UNLV for just the second time next Saturday in their home opener.

TEXAS A&M: The Aggies stay home again next week when they'll face FCS opponent Prairie View, which is just 50 miles away, for the first time.