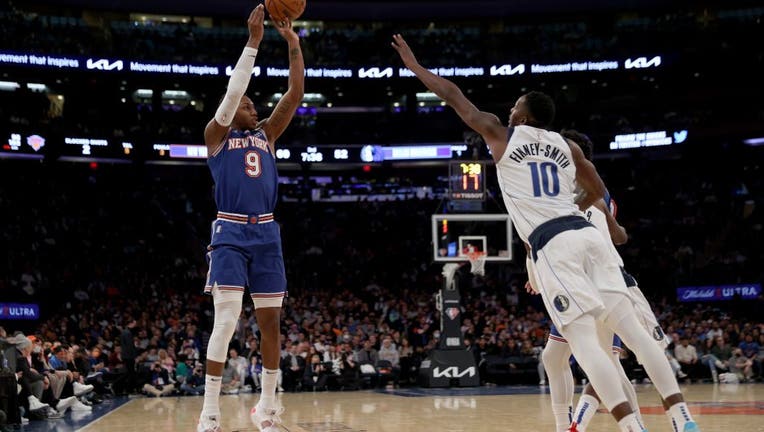 Robinson threw down three dunks in a powerful third quarter for the Knicks, who won for the fourth time in five games and returned to .500 at 21-21. He shot 9 for 10 from the field and had 10 rebounds.

"I thought RJ, monster game. Mitch, monster game," Knicks coach Tom Thibodeau said. "That may have been the best game of the year for our starters. Really played hard and played well."

The Knicks said Barrett, 21, became the youngest player in franchise history with consecutive 30-point games. He was 9 for 11 for 21 points after halftime.

Julius Randle finished with 17 points, 12 rebounds and eight assists. Booed in the last game after holding his thumb down to the crowd last week, he gave fans nothing to be mad about with a strong all-around game.

The Knicks started 5-1 after returning to the playoffs last season for the first time since 2013. But they hadn't been .500 since a Dec. 7 victory at San Antonio left them 12-12, until their current stretch of seven wins in 10 games.

"I think we’re going to find success if we continue to do the little things and just continue to work and be consistent throughout the rest of the season," Barrett said. "As long as we do that, we’ll put ourselves in a good position."

Luka Doncic had 21 points and 11 rebounds for the Mavericks, who had won six straight for the first time since 2016 and were looking for their longest winning streak since an eight-game run in their 2010-11 NBA championship season.

But after ending Chicago's nine-game win streak in their last game, the Mavericks clanged their way to an 8-for-37 night (21.6%) from 3-point range. Doncic had only five assists, in part because his teammates missed so many open looks behind the arc — though he was only 1 for 9 there himself.

"Their 3-point shooting for the whole game and Barrett the way he played in the second half was tough on us," acting coach Sean Sweeney said.

The Knicks opened an 11-point lead in the final minute of the first quarter after consecutive baskets by Barrett and that was still the margin when they took a 56-45 lead into halftime.

With the Knicks leading 58-51, Robinson dunked home an offensive rebound and then scored on another follow shot. A 3-pointer by Barrett was followed by another dunk by Robinson before Randle's three-point play capped the 11-0 run and made it 69-51.

It wasn't really close again. When Dallas got within 14 in the fourth, Robinson turned another offensive rebound into a three-point play and he followed with yet another dunk that made it 95-76.

Though Walker hasn't played since appearing in both ends of a back-to-back on Dec. 28 and 29, Thibodeau didn't rule out Walker playing two straight nights in the future. He said that will be determined with input from the player and medical staff.