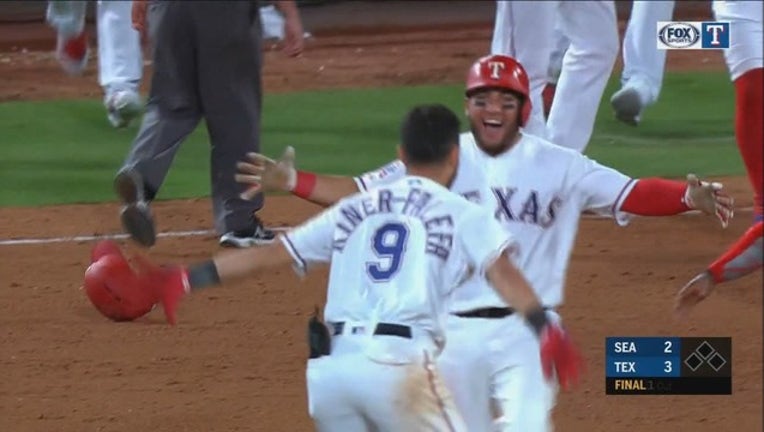 ARLINGTON, Texas (AP) - The night started with Texas celebrating retired infielder Michael Young. It was only fitting that the last remaining Ranger to play with Young helped end the night with another celebration.

Elvis Andrus doubled to start a two-run, ninth-inning rally that ended with Isiah Kiner-Falefa's walk-off single, and the Rangers got some help from video review along the way to beat the Seattle Mariners 3-2 Saturday night.

Andrus, Young's teammate on the Rangers' back-to-back World Series teams in 2010 and 2011, scored the tying run after he was originally ruled out by home plate umpire Jansen Visconti. The play was overturned via replay review.

"There were a lot of thoughts that I had before the game, a lot of things that I put in perspective," Andrus said. "And one of those things was compete. That was one of the things that Michael always told me."

Texas had been held hitless since Andrus' RBI double in the third, when he started the ninth with a double against Matt Magill (4-2). After he went to third on Willie Calhoun's ground out, Nick Solak grounded to short. Andrus broke on contact and beat Dylan Moore's throw with a headfirst slide.

"I love that play because I can be a lot more aggressive than I am usually," Andrus said. "As soon as I made that contact I was gone."

Visconti ruled out, but crew chief Jerry Meals called for a review that overturned the play.

"You got to give it to him for getting an excellent read on it," Seattle catcher Austin Nola said. "There's nothing else you could do. He got a good read and had a great slide too."

Solak reached first, then went to third when Rougned Odor's grounder squirted off second baseman Dee Gordon's glove for a single that was originally ruled an error. Danny Santana was intentionally walked, and Kiner-Falefa stroked the winning single to right-center.

Emmanuel Clase (2-2) pitched out of a jam in the top of the ninth to get the win, one night after earning his first big league save.

Daniel Vogelbach had given Seattle the lead with a sixth-inning RBI single.

THE NIGHT IS YOUNG'S

The Rangers retired Michael Young's No. 10 in a pregame ceremony. Young, who played for the Rangers from 2000 to 2012, is the franchise's leader in games played, hits and runs scored.

Some of Young's former teammates attended the ceremony, including the last two Rangers to have their numbers retired: Ivan Rodriguez and Adrian Beltre. The loudest ovation was for former Texas manager Ron Washington, who guided Young and the Rangers to back-to-back World Series in 2010 and 2011. Washington, now a coach for the Braves, missed Atlanta's game to attend the ceremony.

Rangers manager Chris Woodward is three months older than Young, and the two grew up together in Covina, California.

"The ultimate professional, the most prepared guy, the most competitive guy and the most selfless teammate," said Woodward of Young. "That's what I ask guys to be. How much can you impact the people around you?"

Tommy Milone wasn't named the Mariners starter until early Saturday, but he gave up just three hits and one run in five innings, striking out four. He was in line for the win until the Rangers rallied. Matt Wisler, Taylor Guilbeau and Anthony Bass each threw a perfect inning before things unraveled in the ninth.

"Tommy pitched great," Seattle manager Scott Servais said. "Kept us right there. You got to score some runs on the road to win ballgames and we were close to pulling it out but offensively didn't get a ton going tonight."

Seattle had runners on second and third with one out in the ninth, looking to get insurance when Clase entered. The Mariners tried a safety squeeze, but Keon Broxton couldn't get the bat on an outside pitch and Moore strayed too far off third base. He was caught in a rundown and tagged out. Clase then struck out Broxton to end the inning.

The Rangers had lost a replay challenge in the seventh inning when Odor tried to bunt his way on to lead off the inning. Guilbeau scooped up the bunt and flipped to Gordon covering to narrowly beat Odor -- a decision the replay upheld.

LHP Yusei Kikuchi (5-9, 5.36) will start for Seattle in the conclusion of the four-game series. The Rangers have not named a starter, but Woodward said LHP Brett Martin (1-2, 4.56) would probably get the nod.