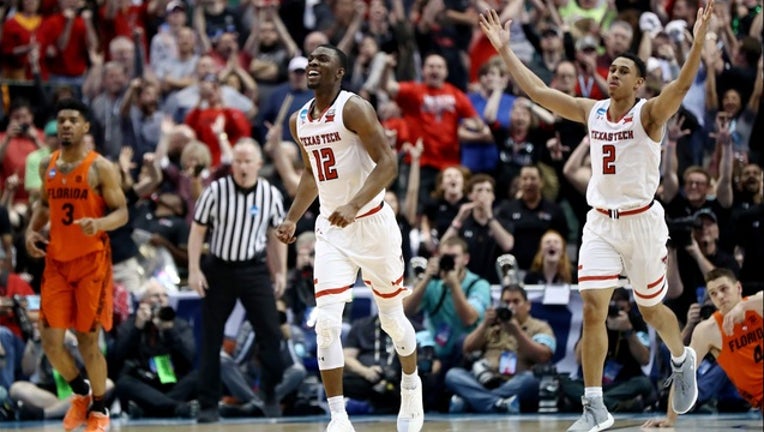 Keenan Evans and Zhaire Smith of Texas Tech celebrate in the second half against Florida during the second round of the 2018 NCAA Tournament at the American Airlines Center on March 17, 2018 in Dallas, Texas. (Photo by Ronald Martinez/Getty Images)

They have another game with the Red Raiders headed to the NCAA Tournament's Sweet 16 for the first time since 2005.

Evans, who treats every game like senior night and doesn't want to be done, scored 22 points and hit a tiebreaking 3-pointer with 2 ½ minutes left as third-seeded Texas Tech beat Florida 69-66 on Saturday night.

While the next loss will end All-Big 12 guard Evans' career, high-flying freshman Zhaire Smith is just getting started.

Smith had 18 points, nine rebounds and seven assists, and was on the receiving end of an alley-oop pass from Evans with 29 seconds left for a punctuating dunk to send the Red Raiders (26-10) to Boston for a matchup against Purdue or Butler next Friday night.

Chris Chiozza did go the length of the court for a Florida layup with 25 seconds left before Evans lost the ball when trying to fight through a double-team after the inbound pass.

The Gators gathered the ball after a wild scramble. Egor Koulechov and KeVaughn Allen both had 3-point attempts in the final 10 seconds that came up short.

Florida (21-13) fell short of the Sweet 16 - and the Elite Eight - for the first time in their last six NCAA Tournament appearances. The last time they didn't even make it to the Sweet 16 was in 2010, when the SEC team lost a first-round game to BYU.